Day 4 of five days of Spring Migration tours today. After three days up on the North Norfolk coast, we headed down to the Broads – not least because there were several good birds to see down there. It was thankfully less windy than yesterday but, after spitting on and off from late morning, it finally started to rain around 3pm, unusually around the time it was forecast!

It was a long drive down to the Broads this morning. A Pallid Harrier had been found on the coast between Horsey and Winterton yesterday and was reported to be still around today, so we headed straight over there first. We parked in the car park at Winterton and set off north through the dunes.

We could see four or five people standing on the top of a tall dune in the distance and we met one of the locals coming back who told us that was the best place to head for first, even though the bird had headed off north. As we made our way over the dunes, there were Wheatears everywhere, flying off in all directions ahead of us.

Wheatear – there were lots in the North Dunes today

When we got up onto the top of the tall dune, the message was the same as we had heard earlier – the Pallid Harrier had been seen flying off north and lost to view. Still, it had been back once or twice already, so this seemed like the best place to stand for now.

There were several dog walkers out this morning and one of them flushed a small group of Ring Ouzels, which flew off ahead of them and landed in the tops of a small group of scrubby trees down in the bottom of the dunes. We just got them in the scope before they were flushed again and flew off further north.

While we were all watching the Ring Ouzels, one of the group asked ‘what’s this bird over here?’. We turned around to see the Pallid Harrier a short distance away! It was chasing a Skylark over the dunes, twisting and turning. The Skylark got away and the Pallid Harrier turned towards the dune where we were standing and flew right past just below us. Wow! 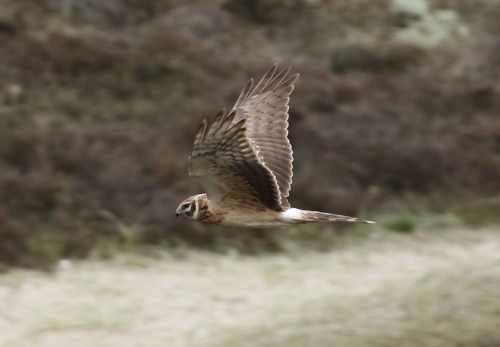 Pallid Harrier – came right past just below where we were standing

We could see the Pallid Harrier‘s pale collar, set off by the dark ‘boa’ just behind. It was much slimmer winged and more streamlined than a Hen Harrier too. It headed off south towards the car park, then turned and started to make its way back, along the seaward edge of the dunes. It came past us again, a bit more distant this time, and we watched as it disappeared away to the north. It was clearly doing a regular circuit of the dunes, between the beach car park and Horsey to the north.

Having enjoyed such fantastic views of the Pallid Harrier, we set off down into the dunes to try to get a better look at the Ring Ouzels now. There were more Wheatears here and a male Stonechat, which perched up obligingly in the top of a small tree next to the path. 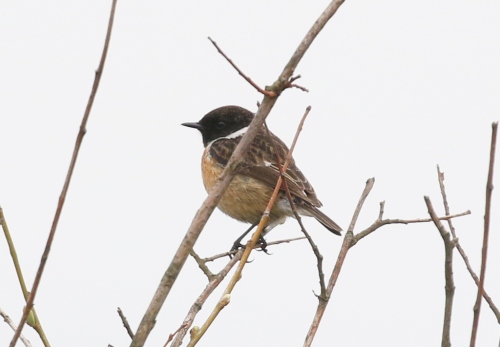 Stonechat – this male perched up obligingly near the path

Before we even got to where we thought the Ring Ouzels had gone, we flushed one from a bramble clump ahead of us. It flew off over the crest of the dune calling. When we got to the top, we saw three Ring Ouzels fly again, from a ridge further over. They seemed to be very flighty today. We swung round in a wide arc to the north, to try to find somewhere to try to view them from a safe distance, but they were off again.

This time the Ring Ouzels, now four of them, flew across and landed in front of a large dune where some people were sitting looking for the Pallid Harrier. We made our way round to the back of the dune and crept up the side. When we looked over the edge we could see the Ring Ouzels on the next dune ridge over. They were feeding happily and we had a good look at them through the scope, several males and at least one female, before they dropped down the other side of the ridge out of view.

As we walked up to join the others on the top of the dune, they alerted us to the fact that the Pallid Harrier was doing another pass behind us. We followed it as it disappeared off to the south again, down to the car park. A few minutes later, it was back and we watched as the Pallid Harrier headed off north low over the dunes. Great views again! We had been spoiled now, with the performance the Pallid Harrier had put on for us, so we decided to move on and see what else we could find.

As we made our way back south through the dunes, there didn’t seem to be as many birds as on our way up earlier, particularly we didn’t see any more Wheatears. Probably they had all been flushed out of this part of the dunes by all the people walking through. There were lots of Skylarks singing and we did come across a smart male Yellowhammer perched in the top of a small tree.

We carried on south, over the road and on into the south dunes. As we got up to the first trees, we could see a small warbler flitting around in the bare branches and picking at the leaf buds which were just starting to open. It was a Lesser Whitethroat and we watched it for a couple of minutes as it worked its way through the branches. A Chiffchaff flew in and started singing from higher up in the same tree.

A little further on, we found a Willow Warbler and a Blackcap. The Willow Warbler was singing from time to time, a beautiful, sweet descending scale, and showed well in some low hawthorns. The Blackcap kept low in the brambles, subsinging. 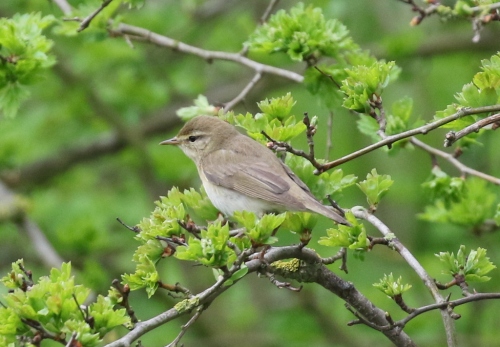 Willow Warbler – we saw several in the south dunes

As we continued on south, there were more warblers in the trees and bushes. Another Lesser Whitethroat, another couple of Willow Warblers, another Blackcap. A Common Whitethroat started singing but disappeared off ahead of us.

There were not many birds moving today. We did see a small number of Swallows, but only about 4-5, heading north through the dunes, and next to nothing else. There were plenty of Linnets and a few Meadow Pipits in the dunes. 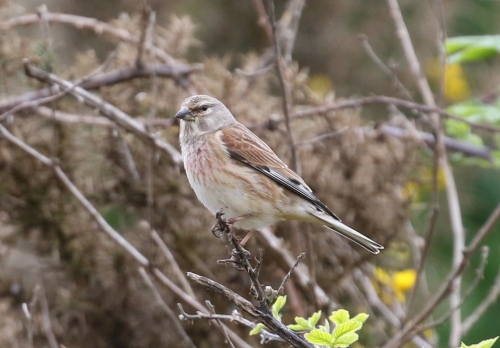 Linnet – still quite common in the dunes

As we turned to head back, a male Stonechat was singing from the brambles in the middle of the Valley. A particularly bright, lemon-yellow breasted Willow Warbler was flitting around in one of the small oaks in the next clump of trees. We made our way slowly back to the car.

News had come through that the Black-winged Stilt, which had been found at Potter Heigham yesterday, was still present today. So we made our way over there next. When we got there, it was time for lunch. As we ate, a male Marsh Harrier was displaying high over our heads, calling.

Scanning the first pool we passed, we spotted a very smart drake Garganey out in the middle, so we stopped to have a look at it through the scope. There were lots of other ducks on here too – Mallard, Gadwall, Teal, Shoveler, Pochard and Tufted Duck. Plus both Little and Great Crested Grebes, both in breeding plumage.

We had just started to walk on when we received a phone call to say the Black-winged Stilt had just flown over our way. Sure enough, we found it on the next pool, quite close, down towards the front. We got it in the scope, noting its black mantle and black markings on the head, suggesting it is a male. 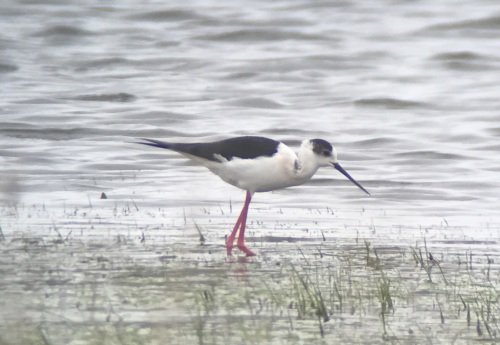 The water levels are quite high here at the moment, so there are not that many places for it to feed and it appears to be very mobile. The Black-winged Stilt made its way along the edge of a flooded grassy island, then flew over to the next pool. We watched it on there for a few minutes before it was off again, and flew over to the pools at the back by the river.

From here we could see two more Garganey on the bank at the back of this pool. A flock of hirundines was hawking over the water, mainly Swallows and House Martins. One Common Swift was in with them.

We were told that a couple of Spoonbills had flown in and landed on one of the other pools, along the access track. We walked back there but couldn’t see them at first – they were not where they had been earlier. Then we picked them up, feeding with their heads down half hidden behind a line of reeds. Eventually they put their heads up briefly and we could just about see them properly.

There were lots more duck on these pools and a group of five Garganey were down towards the front. There were four smart drakes, with bold white stripes on their heads, and a single browner female. It is great to see groups of Garganey like this – a scene more like spring in the Mediterranean than the UK. There was also a single drake Pintail lingering here.

Garganey – a flock of five, including four drakes

It was starting to rain now, but we wanted to see if we could find any Cranes. We headed back past the car park. A couple of Sedge Warblers were singing from the reeds and then we heard a Reed Warbler too – much more structured and rhythmical.

Continuing on, we came to an open area where we could scan a large expanse of grazing marsh. The first thing we set eyes on was a pair of Cranes over in the distance. We got them in the scope and there was no mistaking them. As it was raining harder now, we made our way back to the car. A Grasshopper Warbler reeled briefly from deep in the bushes out in the reeds.

Having achieved all our targets here, we decided to head back towards North Norfolk and stop to see if we could find anything from the car on the way. We made our way up to Cromer and turned west along the coast road.

Our first detour was at West Runton where we had a quick look in the paddocks along the road down to the beach. A single Wheatear was perched on one of the fence posts, looking decidedly soggy. It was too wet to have a look at Beeston Bump now, so we continued on to Salthouse and drove up the Beach Road. A single Wheatear was out in the grass just north of the main drain.

Our last detour was at Cley, where once again we headed down along the road to the beach. We stopped at the bend and scanned out along the fence line. The first bird we set eyes on was a cracking male Whinchat, preening in the wet. A great bonus at the end of the day! There were also dozens of Swallows here too, perching on the fence or hawking low over the reeds, along with several Sand Martins and one or two House Martins.

Hirundines – gathered on the fence in the rain

We had a quick look at the sea from the beach shelter, but there was not much happening offshore. A couple of Sandwich Terns flew past calling.

We had enjoyed a great day out, despite the rain setting in later, and see a really good selection of birds. We decided to call time and head for home.