A Summer Tour today in the Brecks, the first of 3 days. It was generally sunny but with some high cloud at times meaning it wasn’t quite as hot as it had been earlier in the week. 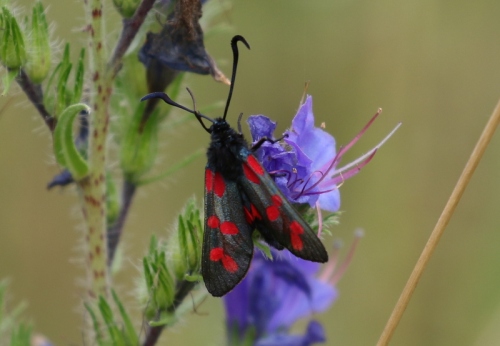 We stopped to have a quick look for Stone Curlews on the way. There was no sign of the two juveniles we have been watching for the last month or so, but as they were already well grown it is possible they have fledged by now. At this time of the year, particularly after such a wet spring and early summer, the vegetation is very high and the birds can easily hide from view too. We did see a Green Woodpecker fly over.

There were lots of insects to look at. Lots of Burnet Moths were buzzing around the flowers – Six-spot and Narrow-bordered Five-spot Burnets. We managed to find both Small Skipper and Essex Skipper too (and, with the help of a photo or too, to have a close look at the underside of their antenna tips!). Several Meadow Browns were fluttering around in the grass. Ringlets and a couple of Brown Hawker dragonflies were buzzing round the brambles. 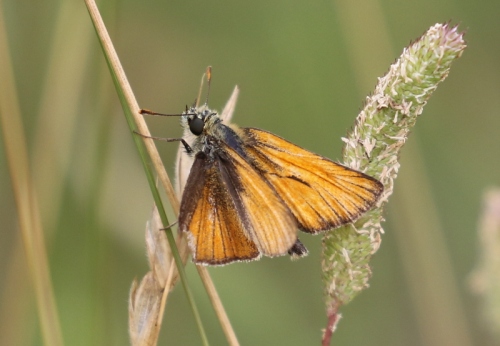 Weeting Heath is normally a very reliable place to see Stone Curlew at this time of year, as the rabbits traditionally keep the vegetation down. However, it has been a very difficult season for Stone Curlew there this year. The first broods were being incubated just as the cold and wet weather arrived and both nests were lost. Only one pair eventually returned to re-lay but was then predated by a fox. In addition, the rabbit population has collapsed in recent years and the vegetation here is also unusually high this year. Consequently we have not seen Stone Curlews from the hides here with any regularity in recent weeks, but we still had a very brief look in as we were passing. A family party of four Mistle Thrushes were the best we could find. We didn’t hang around long as we wanted to get on to Lakenheath Fen before it got too hot.

The sun was shining as we pulled into the car park at Lakenheath Fen. A Blackcap was singing from the bushes by the visitor centre. There were lots of Reed Warblers clambering around in the sallows by the path as we walked out. There seemed to have been a very recent emergence of Red Admirals – there were loads of very smart looking butterflies on the flowers beside the path and even coming down to the almost dry puddles on the path itself. 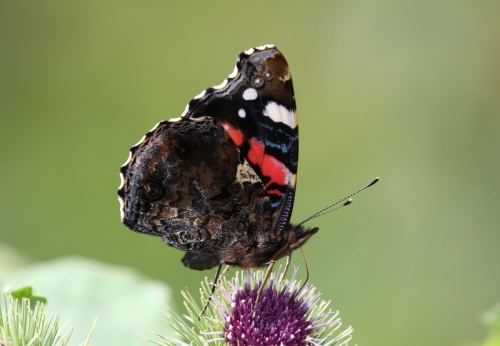 There were a couple of Great Crested Grebes out on the water in front of New Fen Viewpoint when we arrived. A young Marsh Harrier circled up over towards the river and flew across the back of the reeds, very dark chocolate brown with just a golden orange-yellow head. A Bearded Tit flew up unannounced from the reeds right in front of us and disappeared over into the vegetation just beyond the shelter. We could hear occasional quiet ‘pinging’ and then see the reeds moving, before if flew back low across the water – a smart adult male, with grey head and black ‘moustache’.

A sound like a squealing pig alerted us to the presence of a Water Rail down in the reeds below us, but it was typically keeping itself well hidden. A Common Tern was flying back and forth right at the back, fishing, before eventually flying straight towards us and doing a circuit of the pool in front. 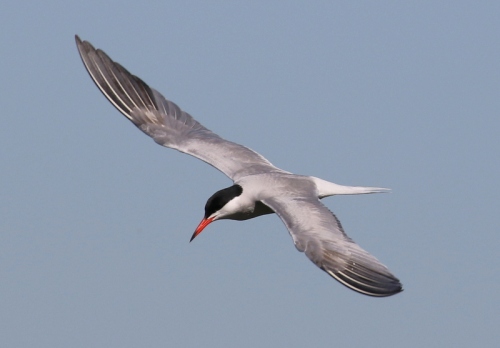 It was starting to warm up, so we carried on out towards Joist Fen. As we approached the junction in the path by the West Wood, we could hear a Kingfisher calling and spotted it flying straight towards us. It landed on a low stump on the edge of the trees just a few metres away from us, but unfortunately was quickly spooked by our presence and flew off again in a flash of electric blue. Another male Bearded Tit perched up in the top of the reeds as we walked on, giving us a much better look at it before it flew across the path and disappeared into the reeds.

We had only just arrived at Joist Fen Viewpoint when one of the other people already there shouted ‘Cranes‘. We looked out over the reeds to see four Common Cranes flying across. There are two pairs of Cranes at Lakenheath at the moment, one of which has recently fledged two chicks and these were the birds we could see. They had been feeding over the other side of the river and were flying back home. They flew slowly across over the reeds before dropping down out of view the other side. Great stuff! 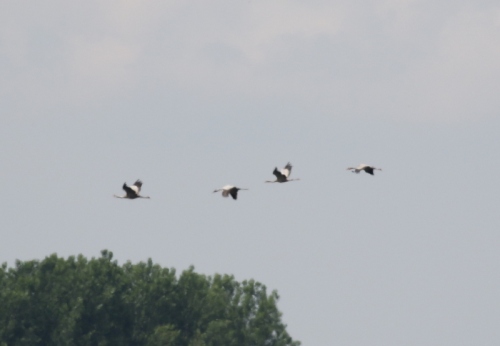 This had been a good spot to see Bitterns on their feeding flights earlier in the week, but we had just missed one before we walked up. We waited a while but it seemed increasingly like we would be out of luck. Some new arrivals at the viewpoint announced that one had flown across in front of West Wood while we had been looking out at Joist Fen. One of the group then caught a quick glimpse of one which dropped straight back into the reeds, while the rest of us were admiring another recently fledged young Marsh Harrier which was circling up out of the reeds, calling. 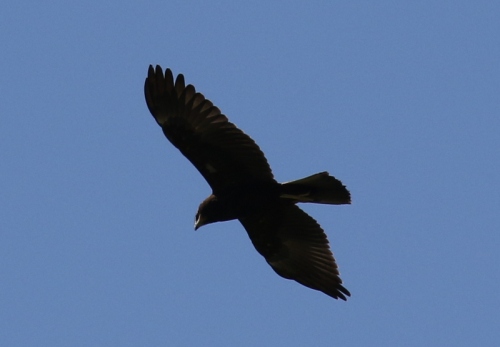 Just when we were about to give up hope, we turned to see a Bittern. It flew slowly past the viewpoint and continued way out over the reedbed beyond. Well worth the wait! 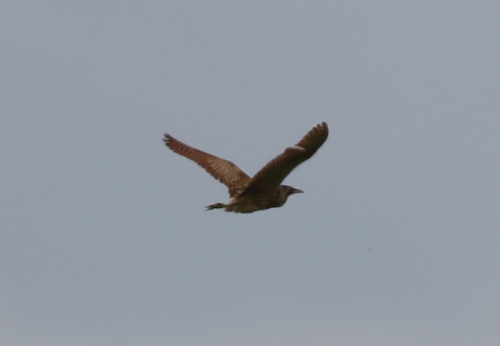 With time getting on, we decided to start the walk back at this point. We stopped in at Mere Hide on the way. There has been a Kingfisher on the posts in front of the hide in the last week, but there was no sign of it when we were there. A couple of Bearded Tits zipped to and fro over the reeds, calling. Several Reed Warblers were clambouring around low down in the reeds just across the water.

The highlights from Mere Hide were the dragonflies. A large, blue and green, Emperor patrolled back and forth in front of the hide. Several Four-spotted Chasers were chasing about low over the water. There were a few Common Blue Damselflies around the reeds and a couple of Banded Demoiselles flopped past. The Red-eyed Damselflies were harder to spot, remaining mostly still perched on the islands of blanket weed. 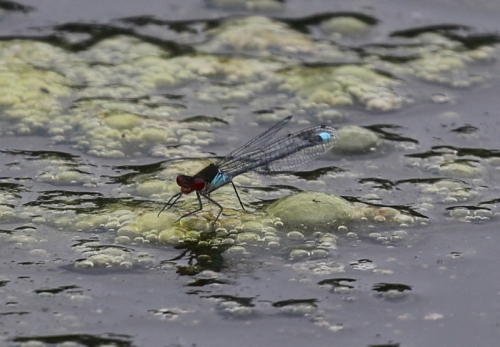 As we walked out of the hide, back towards the main path, another Bittern flew overhead and disappeared out over New Fen. Then it was quickly back to the visitor centre for a late lunch, with Common and Ruddy Darters buzzing about our feet on the way.

After lunch, we decided to have another go for Stone Curlew and headed over to Cavenham Heath. We parked in a suitable spot and got out to scan the heath. The grass had grown quite tall here too, but was better than at Weeting. Almost hidden in the vegetation some way over, we could just see the head of a Stone Curlew sticking out, the black-tipped yellow bill and the yellow iris. We got it in the scope and most of the group were able to get onto it but if we dropped the scope height down it became impossible to see. We were just trying to reposition ourselves when it disappeared.

That was a great start, but we wanted everyone to get a look at one, so we walked along the path, scanning across the heath. A pair of Stonechats were perched up in the taller vegetation across the heath on the other side of the track. A Green Woodpecker called from the trees. There were several butterflies on the flowers by the path, Meadow Browns, Ringlets and several very smart Small Coppers. 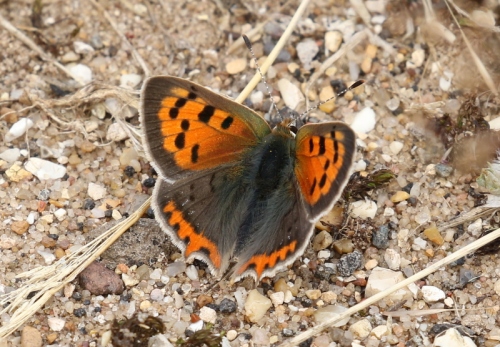 We were beginning to think we had run out of luck when we spotted a Stone Curlew right out in the open on a grassy mound. We quickly got it in the scope and each had a brief look at it, expecting it to walk back down into the long grass, but it stayed where it was and started to preen. We were then able to get really good, long looks at it. Cracking stuff and well worth the effort! 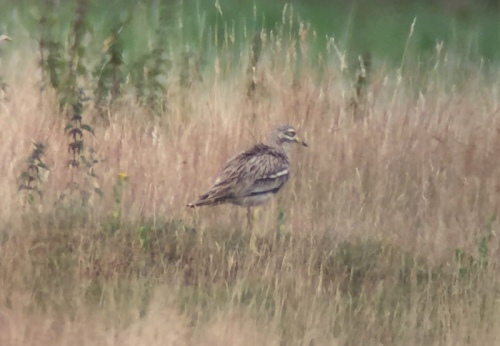 Stone Curlew – finally one stood out in the open

While the Stone Curlew stood out on the mound, we continued to watch it. Eventually, it finished preening and, after standing looking round for a few minutes, it walked back into the long grass and out of view. We walked slowly back to the car and had just got back in when we heard Stone Curlews calling. Two flew up from the heath, possibly one being the bird we had first seen, and disappeared away over the trees beyond.

Today had been billed as a day of Stone Curlews, Cranes and Bitterns, and so it was – we got there in the end. With that, it was time to head for home. On our way back to the road, the Rooks and Jackdaws were gathered en masse on the wires, about to do the same.