Easterly winds in Autumn mean migrants and the weather chart had been dangling the prospect of some suitable conditions for several days. It was time to get out in the field and look for some birds.

Tuesday morning was windy and damp, but with the winds still coming off the near Continent first thing, there were few new birds to be found. A walk from Stiffkey to Warham produced nothing more than a couple of Lesser Whitethroats and a lingering Swift. However, through the morning the wind direction changed and the birds started to arrive. A walk out along the lane to Kelling Water Meadow looked likely to be similarly quiet until a flash of movement along the hedgerow caught my eye. Standing quietly for a second and a Pied Flycatcher flicked out and landed briefly on a bare branch, the first sign of things to come. Out at the Water Meadow, an adult Little Gull struggled east into the wind, and a Hobby buzzed through, flushing the waders from the pool. 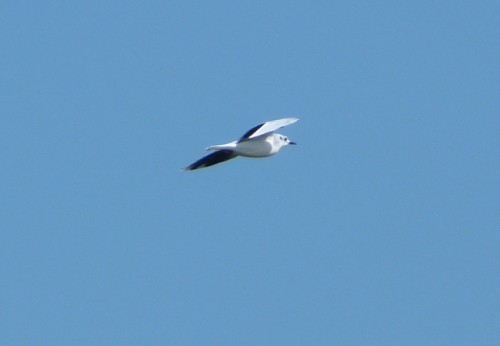 Little Gull battling against the wind

With the first sign that migrants were starting to arrive, I decided to head for Blakeney Point – the Point is a magnet of migrants in the right conditions, though the walk out is not for the faint-hearted. The first section produced nothing of note, and I was just starting to wonder whether I had set out too early. Then a bird flew up from behind the low Suaeda bushes just ahead of me – the slightly larger size, grey-brown colouration, longish tail and streamlined appearance were instantly recognisable, a Wryneck! As I walked on, it flew up again and dropped into deeper cover out of view. I have seen many Wrynecks here over the years, but it is always a real buzz to stumble across one. A great start. 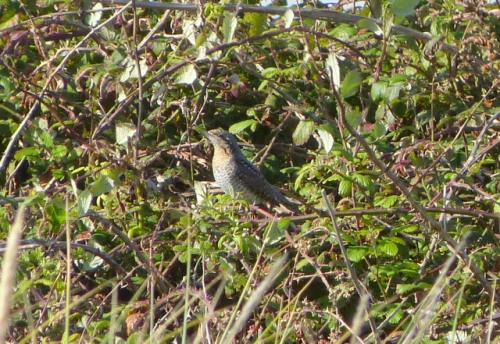 I was joined by two other hardy souls and we continued on our way. Gradually, we started to see other migrants. Wheatears and Whinchats, fresh in from the sea. Willow Warblers flitting around the low bushes by the shingle ridge. Then a second Wryneck flew up in front of us and dived back into cover. This one flitted on ahead of us several times as we walked along, only perching out briefly a couple of times, until it reached an area with more bushes. A juvenile Black Tern took shelter from the wind in the harbour, with the other resident terns.

Wheatear – fresh in from the sea and very confiding

Out at the Plantation, we spent some time watching both Pied and Spotted Flycatchers hawking for flies from the few stunted trees. A Redstart also lurked in amongst them. Out on the Point itself, we came across a third Wryneck and added Garden and Sedge Warbler to the list of the day’s migrants. We carried on hunting until dark started to fall and we had to make the long walk back to Cley.

A glutton for punishment, I made the long trek out again the following morning. With clear conditions overnight, it was immediately clear that many of the birds from the previous day had moved on. Still, a nice Hobby perched up on the shingle ridge and a Peregrine flew over.

Hobby – resting on the shingle ridge

I couldn’t find any new arrivals, despite the continuing NE wind, but came across two of the Wrynecks from the previous day still in much the same places, and was able to linger a little longer with them. The Pied Flycatcher was still present, along with several Willow Warblers, but the Spotted Flycatcher appeared to have moved on. It was glorious out on the Point in the sunshine, and a great way to round off an exciting couple of days.

The weather chart had been looking good for this week. Well, good for birds if not good for the actual weather. There had to be something unusual out there waiting to be found.

Tuesday looked the most promising day to start, with the combination of NE winds coming off the continent, together with rain. However, it turned out to be a damp squib, in more ways than one! I tried various sites in the morning, with no sign of any migrants. Still convinced there had to be something good out there, I headed for Blakeney Point. The rain had grown increasingly persistent but seemed to subside for a while, so I set off. I should perhaps have been put off by the people returning bedraggled, having seen nothing, but I pushed on to beyond Halfway House before the rain came back with a vengeance. Very unusual for it to be as bad as this, finally I gave in and trudged back, defeated and disappointed.

Wednesday started overcast and cool, but at least it wasn’t raining. Not to be put off by the day before, I headed straight for Blakeney Point again and set off back over the shingle. I was a short distance before halfway and hadn’t seen anything when I received a phone call to say that no migrants of any note had been seen at the end of the Point so far that morning. Needless to say, that caused my enthusiasm to wane a little. However, I pressed on anyway and just a couple of minutes later I was glad that I did! A small bird flew up from the edge of the saltmarsh which immediately caught my attention. I saw it in flight twice more and I had an idea what it was – it was clearly a small Sylvia warbler and most likely a Subalpine Warbler. However, it disappeared into cover and I couldn’t find it again on my own. Thankfully, several others were also heading out onto the Point and pretty soon I had managed to gather a small group. Together, we scoured the area and eventually relocated the bird. It took us some time to see it properly and finally we were able to confirm that not only was it indeed a Subalpine Warbler, but also that it showed the characters associated with the Eastern form, a very good find indeed.

The rest of the day saw a steady stream of migrants finally reveal themselves. The other highlight was a cracking lemon-yellow Icterine Warbler which suddenly appeared from nowhere in the Plantation. Not one, but two stunning male Black Redstarts feeding together around the buildings were arguably the smartest birds of the day. We also saw Redstart, several Spotted Flycatchers, Whinchat and a good selection of other warblers. All-in-all, a great day on the Point.

On Thursday, I had business to attend to or I would have returned to Blakeney Point. Instead, I had to content myself with going to see the female Black-headed Bunting which had been found the evening before at West Runton. A great rarity in this part of the world.

The weather looked less favourable on Friday. While the wind direction looked good overnight, it was gradually moving round, and the clear and sunny conditions suggested birds might move on. Undaunted, I set off along Blakeney Point once again. The walk out revealed rather little – many birds had indeed departed and just a few commoner migrants remained. Still, it is always a beautiful place to walk in the sunshine, and I also finally caught up with the stunning male Snow Bunting which had been lingering on the shingle ridge. The Black Redstarts were still present and the only other bird of interest was a Spotted Flycatcher.

I was tempted to leave, but bumped into some friends sat in the sunshine by the Plantation so decided to join them for lunch. While we were talking, I heard a bird call in the distance which I thought I recognised. It came a bit closer and I suddenly clicked that it was a Bee-eater! I leapt up shouting and a quick scan of the sky revealed two Bee-eaters coming low over the dunes. They passed right over our heads, then headed on west over the old Lifeboat House and away. They have always been one of my favourite birds, ever since I used to thumb through old field guides as a boy, and such a great joy to see them in the skies of Norfolk. The long walk back was broken with a stop for a Siberian Chiffchaff which had been located in the bushes on the edge of the beach – while we were there, it broke into song, a rare sound indeed here and very different from the common Chiffchaffs we had been listening to earlier in the Plantation. A very different day to Wednesday, but once again what a day!

It all goes to show just how exciting birding in Norfolk can be when the conditions are right. 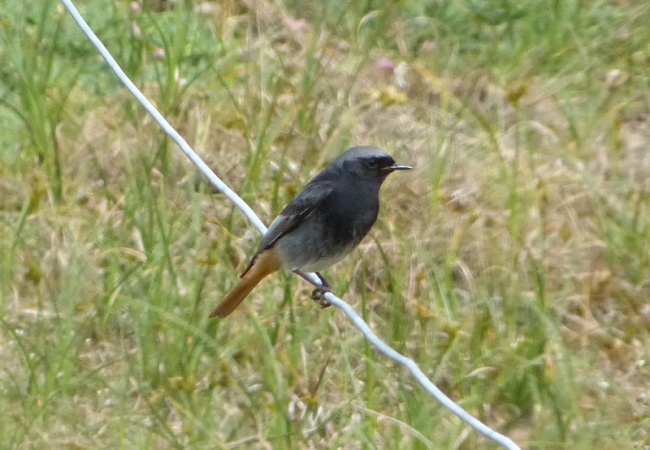 It was a foggy start on the coast this morning. With a cool NE breeze as well, it didn’t feel like a day for spring migrants, but we had a half-day out booked. I was asked whether it might be possible to see Wrynecks at this time of year and, knowing that there had been one on Blakeney Point for the last couple of days, I thought it might be worth a try. As we arrived at the beach car park, you could barely even see the sea, but we decided to have a go anyway. And we were glad that we did.

As we walked out along the shingle the mist started to lift a little and slowly the birds started to appear. At first, we came across a few Wheatears. Then a late Fieldfare flew up in front of us. A Willow Warbler and a couple of Chiffchaffs flitted about in the bushes and a Tree Pipit flew over calling. Suddenly three large white shapes appeared out of the mist in front of us – Spoonbills – flying off west over the harbour. Best of all, a loud ‘tchacking’ behind us revealed a female Ring Ouzel.

Arriving at Halfway House, we had no trouble relocating the Wryneck, though it was a little flighty. By now, the visibility had improved and we could see out across the harbour. A couple of Little Terns were sitting out on the mud, two Common Terns were feeding over one of the channels, and a good selection of the usual waders was on view. Feeling thoroughly satisfied, we decided to head back. There seemed to be even more Wheatears now, but just to round the morning off nicely a female Redstart flicked up in front of us.

Quite a morning’s haul, given the conditions we set out in. 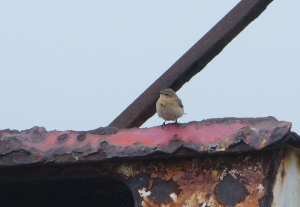