Day 2 of our three day Winter, Brecks & Goshawks tour today. It was rather cloudy and grey first thing, with some brief spits of rain which were not in the forecast. Thankfully it didn’t come to anything, and remained dry thereafter, with some sunny intervals developing from late morning. The wind was very light again first thing, but did pick up a bit through the day. We headed back down to the Brecks in the morning, but finished the day up in North Norfolk.

When we got down to the Brecks it was spitting with rain – not the weather we were hoping for to look for Woodlarks. We parked by a large clearing and as we got out of the minibus a Great Spotted Woodpecker was calling. We looked across to the other side to see it perched in the top of a tree. A Green Woodpecker yaffled too. There were several birds feeding in the paddocks across the road – a small flock of Meadow Pipits, mixed finches, a couple of Mistle Thrush and a Redwing.

As we walked round the clearing, it was fairly quiet at first, with activity perhaps curtailed by the weather. Several Yellowhammers were flying in and out of the pines at the back, down into the clearing and back up, calling and singing. Two males spiralled up out of the tops of the trees fighting.

We saw something drop down into the grass in the far corner, so made our way over to see what we could find. We could hear a Woodlark singing quietly now, but couldn’t see it at first. It was down on the ground, hidden in the long grass. Then one flew up from further over, out in the middle of the clearing, and started singing. A second, possibly the one we had been listening to, also flew up and landed in the trees at the back, where we could get it in the scope. 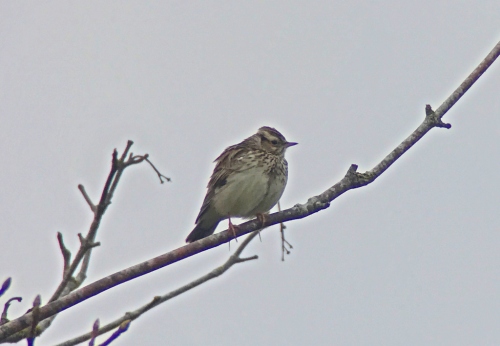 There was quite a bit of Woodlark activity now, involving at least three birds. We watched the Woodlark in the tree at the back for a while, before it dropped back down into the grass. We managed to see it on the ground this time, and a second bird nearby calling was possibly a female. When another male flew in, the two of them chased each other back up into the trees. But apart from the first bit of song flight, the males were only singing from perches in the trees or down on the ground this morning.

Having enjoyed good views of the Woodlarks, we drove round to another forest track and walked up into the trees. We were looking for Willow Tit here and there were certainly lots of tits coming and going from the feeding table set up in the pines. We stood and watched for a while, but all the black capped tits we saw were dozens of Coal Tits and a good number too of Marsh Tits. A Nuthatch typically darted in, grabbed a seed, and was back off into the trees.

Coal Tit – there were dozens coming down to the feeding table

Then we heard a Willow Tit calling in the pines, a distinctive nasal scolding call. It was deep in at first, but gradually came closer each time we heard it again. Eventually it made its way to the edge of the trees and we managed to pick it out, feeding high in the pines. It seemed to be feeding on the cones. A second Willow Tit was still calling, deeper in. The first bird looked like it was making its way towards the feeding table, but it never dropped down and disappeared back into the trees behind. Both the Willow Tits then went quiet again.

The Willow Tits here are a small remnant population: the species has disappeared rapidly from large swathes of southern Britain in recent years and they are still just about clinging on here. They can be difficult to see in the dense coniferous plantations, spending much of their time up in the tops of the trees, so we had done well to get such prolonged views of one today. We decided to move on.

The weather was starting to brighten up and the wind seemed like it had picked up a little, so we headed over to see if we could find a Goshawk. We parked on a high point, overlooking the forest, where several other people had already gathered. While we were getting out of the minibus, someone came over to say there was a Goshawk perched in the top of a fir tree across the field in front. We got the scope straight on it, but unfortunately it dropped down before everyone could get a look and disappeared into the trees. Still, it was a good start.

With the brighter weather, there were lots of Common Buzzards circling up now, including a striking pale one. A Red Kite came up too, off in the distance. Fortunately, we didn’t have to wait too long before another Goshawk appeared. It circled up above the trees, a male, grey above and pale whitish below. It was distant at first, drifting first one way, then back the other. Then it turned and headed straight towards us. It was not displaying today, but flying purposefully, with deep and powerful wingbeats interspersed with short glides. It headed away to our right slightly, crossing the road as we lost sight of it behind some trees.

Goshawk – a male, flew up out of the trees and in across the road

When all the Woodpigeons came out of the trees, this would normally mean a Goshawk was hunting, but this time a Peregrine appeared instead. It flew out low over the treetops, across the field and over the road. It followed the line of the shelter belt on the far side of the field beyond us, flushing all the pigeons from there too, before disappearing off over the trees behind us. A Sparrowhawk made a brief appearance too and a Kestrel hovering over the field behind us added to an excellent variety of raptors here this morning.

It was almost time for lunch now, but we figured we had time for one more quick stop first. We made our way deeper into the forest and parked at the head of another ride. As we walked in, we heard a Woodlark overhead and looked up to see it fluttering over the trees beside the path singing. It flew round past us and disappeared back over the road, beyond where we had parked.

We had just started to walk back to look for it when the Woodlark came back overhead singing again and dropped down into the clearing further down the track. So we turned round again and walked over to where it had seemed to go down. We were scanning the low vegetation when it walked out from behind a low bank right by the path, just a couple of metres from us. It took off but thankfully landed just a couple of metres further back, and we had a great view of it as it picked its way through the vegetation feeding, stopping on the top of a small clod of earth. Cracking views and a better photo opportunity than the ones we had seen earlier, for the photographers in the group.

The Woodlark gradually made its way back into the long grass, so we headed back to the minibus and drove round to Brandon again for lunch and a welcome hot drink.

After lunch, we made our way north to Fincham. A Red Kite was hunting out over the fields as we drove down the road and found somewhere to park. As we got out, we could already see the Great Grey Shrike on the wires a little further up. We got it in the scope and had a good look at it.

Great Grey Shrike – showed well on the wires at Fincham

The Great Grey Shrike was very mobile, dropping down into the field to look for food, and then back up to the wires. It flew across to some bushes along the edge of the field further up, and spent some time hunting from there, then came back up onto the wires by the road. When it flew across the road and went further out across the field the other side we decided to move on.

We had managed to catch up with most of our main targets in the Brecks (and surrounding areas) now, so we decided to head up to the North Norfolk coast for the rest of the afternoon. The wintering Rough-legged Buzzard at Wells had gone AWOL for a couple of weeks but had then reappeared back in its usual bush a couple of days ago, as if nothing had happened. As we pulled up in the layby, we could see it on top of the aforementioned bush.

We got out of the minibus and got the scopes on it, noting the Rough-legged Buzzard‘s very pale head contrasting with a dark blackish-brown belly patch. Several Marsh Harriers were circling up beyond the bank and another Red Kite further back, more to add to the day’s raptor tally. There were lots of gulls on the flooded field in front of the layby, along with a few Redshanks, and a Linnet or two on the near edge.

We walked down the track where we could get a better view of the Rough-legged Buzzard, side on and not so obscured by branches, although we still couldn’t see its rough legs. A Common Buzzard drifted over the track behind us, a much darker bird altogether. 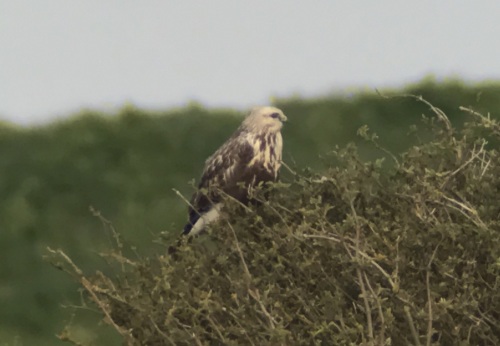 Rough-legged Buzzard – back on its usual bush

Continuing on over the bank, we stopped to scan the marshes. There was a nice selection of waders out on the flooded grazing marsh beyond, several Ruff flying round with a flock of Dunlin, a single Curlew, lots of Lapwings and a few more Redshanks.

A large flock of Brent Geese kept flying in and out of the old pitch and putt over towards the harbour wall, coming over our heads chattering noisily. Looking through the Greylags out on the grass, we found a single Pink-footed Goose hunkered down behind a line of reeds. Another little group of Pinkfeet flew up calling further back. There was a nice selection of ducks here too, including Wigeon, Teal and Shoveler.

A pre-roost gathering of Pied Wagtails was down in the wet grass in front of the water, along with a single Meadow Pipit. A bigger flock of Meadow Pipits flew in along the bank. Four Brown Hares in the ploughed field the other side of the track chased each other round at one point and even engaged in a brief bout of boxing (it is March, after all!).

It was a nice place to finish the day, scanning the marshes here, but it was time to head back now. We would be spending the day tomorrow along the coast here too, with lots more to see yet.