Day 1 of a two day Private Tour exploring the North Norfolk coast. It was a slightly damp and grey morning, with a series of brief drizzly showers, but it dried out and brightened up in the afternoon, when it was warm out of the rather blustery wind.

There was a request for Little Owls ahead of the tour. It is not the best time of year to look for them, and the weather wasn’t particularly encouraging either today, cool, cloudy and windy, so we didn’t hold out much hope. But we drove inland to try our luck. It turned out our luck was in – the first site we tried, we pulled up and scanned the roofs of the farm buildings and there was a Little Owl tucked in under the lip.

Little Owl – sheltering under the lip of the roof this morning

We parked the minibus where we couldn’t be seen and crept round to where we could get the scope on the Little Owl without disturbing it. It saw us instantly and stared at us for a minute, before realising that we weren’t a threat at this distance and turning its attention back to the roof. Looking at the other farm buildings further back, we realised that there was a second Little Owl out too, but it was even better hidden and was much harder to see.

There were a couple of Common Gulls with the Black-headed Gulls in the field across the road and a group of Rooks playing in the wind over the wood beyond. Two Common Buzzards were hanging in the breeze further back. It was a great way to start the day, with a Little Owl. We set off back towards the coast and cut across to Kelling for a walk.

There were lots of finches in the trees by the school – several Greenfinches were good to see, alongside the regular Chaffinches and Goldfinches. There was a little group of Blue Tits here too, and a Blackcap and a couple of Dunnocks in the hedge with them

As we walk up the lane, there were several Chiffchaffs calling in the hedges. A Swallow hawked up and down, passing within a couple of feet once or twice as it tried to find insects in the shelter of the banks either side. There were several Red-legged Partridge calling, released here in huge numbers for shooting, and one scuttled off ahead of us along the lane.

We stopped at the gate by the copse. There were several Teal down in the small pools in the wet grass, and a Green Sandpiper walking round bobbing its tail in the mud where the cows had churned up the ground. Six Common Snipe were well hidden nearby but we didn’t see the four which had been hidden behind the vegetation much closer to us until they flew and landed with the others further back. 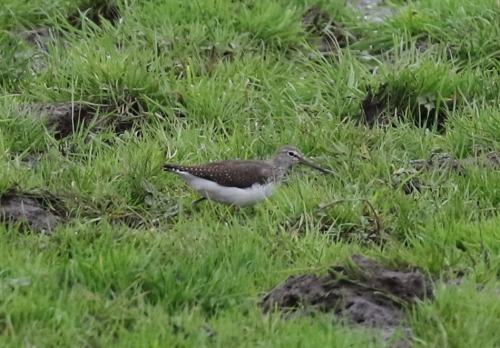 Green Sandpiper – feeding in the grass churned up by the cows

It had been cloudy up to now, but the showers started as we walked up to the pool, with a short sharp burst of drizzle. It quickly stopped, so we carried on. A young Stonechat appeared briefly on the brambles, but disappeared round the back before everyone had a chance to see it.

There were a few more ducks on the pool today, several Gadwall, lots of Teal, a few Shoveler, and one or two Wigeon. We quickly picked out the Garganey which was swimming across in front of the island. We got it in the scope and had a quick look at it before it reached the far side and disappeared into the grass.

One of the resident adult Egyptian Geese was shepherding round the two juveniles from this year, while another pair preened in the edge of the water. There were lots of gulls loafing around the pool again, mainly Black-headed Gulls but there was one juvenile Lesser Black-backed Gull with them, and a couple of Herring Gulls dropped in. A single Sand Martin was still hawking out over the water.

Carrying on down to the Quags, we couldn’t see any chats or any other birds in the brambles on the hillside, but it was rather windy out closer to the beach. We heard a Greenshank call behind us and picked up a very distant Wheatear on a fence post over towards Gramborough Hill. We were intending to walk up the path to the gun emplacements, but it started to rain again so we decided to head back.

By the time we got back to the pool, the rain had stopped. The Greenshank had obviously dropped into the pool behind us and flew up as we approached, circling round before flying off west, probably a freshly arrived migrant stopping off briefly. The Garganey reappeared but disappeared round the back of the island.

The Stonechat was back on the brambles as we turned the corner, staying long enough for everyone to see it this time. Back at the gate, several of the Common Snipe had returned closer again and didn’t fly off this time.

Driving round to Cley next, we decided to stop for a coffee break in the Visitor Centre, to dry out and warm up. Afterwards, we walked out to the hides.

There were fewer waders on the scrape from Bishop Hide today, just a couple of Ruff and a scattering of Black-tailed Godwits. Two Avocets are still lingering here, but most of the birds which spent the summer here have left now. A single Green Sandpiper was feeding along the edge of the reeds right over the back. A little group of about 30 Dunlin was feeding in amongst the lumps of mud where the cows have churned up the scrape, hard to see until they flew round.

There were a few ducks asleep on the bank in front of the hide, several Teal and one or two Mallard, but the single Wigeon was busy feeding on the grass, a better view than the ones we had seen earlier. A Water Rail called from somewhere hidden in the reeds. 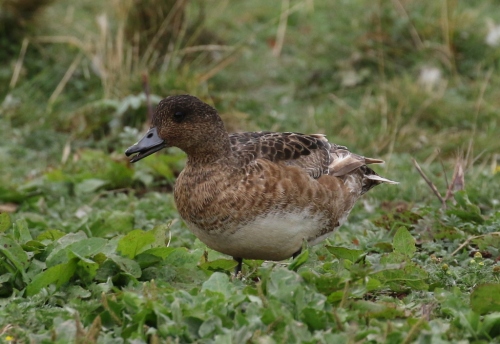 Wigeon – feeding on the grass in front of Bishop Hide

We walked round to the middle and into Dauke’s Hide next. A Green Sandpiper was feeding right down at the front as we walked in. A little group of Curlew were standing around at the back, until they flew off calling. There were a few more Black-tailed Godwits and two Ringed Plovers on the furthest island.

The two juvenile Spotted Redshanks were still here, feeding in and out of the short reeds at the back. We got them in the scope and could see their longer, needle-sharp bill and rather dusky grey plumage. One was feeding with a Common Redshank and the other with a Greenshank, giving us a great comparison of our three regular ‘shanks.

Spotted Redshank – one of the two lingering juveniles

Time was getting on now and we realised we would have to head back back for a late lunch. The weather had at least improved, and the sun was out now, so we found a sheltered spot out of the wind back at the Visitor Centre. After lunch, we drove round to Walsey Hills.

There were just a few Teal on Snipe’s Marsh today, but we found two Little Grebes on Don’s Pool once we got up onto the East Bank. The grazing marsh is looking very dry now, but there was a single Little Egret out on the edge of one of the deeper channels and a Grey Heron flew in. A Marsh Harrier flew back and forth over the reeds beyond, a rather dark male with just a small amount of grey in its upperwings.

Little Grebe – one of two on Don’s Pool

The Serpentine was quieter too today. There were a couple of Dunlin feeding on the mud and a few Snipe along the north edge still. We continued on to Arnolds Marsh and got out of the breeze in the shelter.

Several Sandwich Terns were standing on one of the islands, until something spooked them and they flew off out towards the sea. The Cormorants were drying their wings at the back as usual. A group of Wigeon were out on the water. There were not so many Curlews here today – they had probably gone to find somewhere out of the wind – but still plenty of Redshanks. Three Ringed Plovers were running up and down the sand at the back. 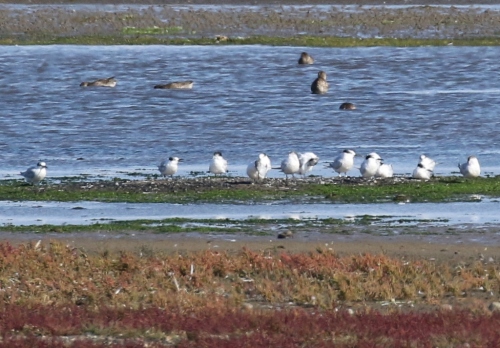 Sandwich Terns – loafing on the islands on Arnold’s Marsh

Out at the beach, two Gannets flew past offshore, a distant immature and an adult which flew in towards us before circling back further out. Two Wheatears on the shingle ridge to the east were flushed steadily towards us by two dog walkers. We could see their white rumps as they flew, before they circled back round behind the people and landed further back. Migrants stopping off on their way south.

Little Egret – there were several feeding on the brackish pools

It was time to head back now. There were several Little Egrets and a couple of Redshanks around the brackish pools as we passed. It had been a very productive first day and we were looking forward to what tomorrow might bring.