A Private Tour today for guests over from the USA, so we were trying to see a good variety of as many different species as possible, common and less so. It was a glorious sunny day, in the middle of a short burst of hot weather, most unusual for a late August bank holiday, and producing record-breaking temperatures for the time of the year. We were pleased to find a light breeze on the coast which stopped it from being too hot, a lovely day to be out birding.

When we got to the beach car park at Wells, it was already filling up fast. We wanted to have a quick look in the woods before it got too busy. We stopped by the boating lake, where a (Great) Cormorant was fishing close to path. There were several Little Grebes scattered around the edges of the water along with the usual Mallard and Coot.

As we walked into the trees, we could hear Coal Tits high in the pines by the path and looked up to see two flitting around in the tops. We found a flock of tits further in, in the birches – Long-tailed Tits, Blue Tits and Great Tits, accommpanied by a few Chiffchaffs and a Blackcap, though the latter was rather skulking. We had good views of a Treecreeper and a couple of Goldcrests in the pines nearby. We could hear a couple of Jays calling further in but they moved off before we could track them down.

Treecreeper – we had good views of one in the pines

As we got back round to the main path it was already getting busy, so we headed back to the minibus. The car park was already completely full and the attendants were turning away cars now at the entrance.

Our next stop was just the other side of Wells. The pools here are drying up quickly in the hot weather, especially the areas close to the track. We could still see lots of Little Egrets in the deeper water over towards the back and one Spoonbill. We had a look at that through the scope, admiring its spoon-shaped bill, and a second Spoonbill appeared from behind the rushes nearby. A Grey Heron was standing on the dry mud on the edge of the water.

Spoonbill – there were two at Wells this morning

Walking on down the track, we started to find a few waders too. There were several Green Sandpipers on the pools, a few Common Snipe doing their best to hide behind the clumps of willowherb, and a single Greenshank. Three Curlew were standing out on the mud before flying off towards the saltmarsh, calling.

Despite the already increasing temperature, there were still a few smaller birds here too. A flock of Linnets as bathing in the shallow pools out in the middle and several Reed Buntings were in the bushes by the track. A Meadow Pipit flew over calling and dropped back into the grass. We could hear a Sedge Warbler calling from the reeds, and it eventually gave nice views in the top of one of the nearby bushes, showing off its bold pale supercilium.

We picked up a Sparrowhawk circling over Wells way off in the distance, but it was not a particularly good view. Thankfully a second Sparrowhawk then circled across over the fields much closer, accompanied with a Kestrel for comparison. They were mobbed by a large flock of hirundines, Swallows and House Martins, as they climbed in the sky and we picked up several Common Swifts circling higher up too. Many of the Swifts which spent the summer here have already left and it won’t be long now before they are pretty much all gone, on their way to Africa for the winter.

We headed further east along the coast to Kelling next. The hedges were fairly quiet as we walked down the lane, apart from a couple of Chiffchaffs calling, but when we got to the gate overlooking the Water Meadow a tit flock came noisily though the copse, several Long-tailed Tits pausing briefly on the corner before they headed quickly off up the track. 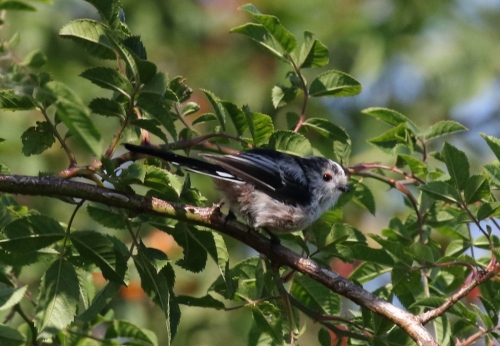 Scanning from the gate, the best we could find was a Pheasant hiding in the grass. But as we carried on up the track, we spotted a covey of Grey Partridges in the field the other side. Several juveniles appeared out of the tall vegetation first, followed by two greyer adults, and they all scuttled off up the hill and disappeared back into the weeds. It is always a treat to see our native British partridge, as the population has declined markedly in recent years, and good to see that they have bred successfully here this summer.

There were two Mute Swans on the Water Meadow pool, along with several Black-headed Gulls. A pair of Egyptian Geese were asleep in the grass and a flock of Starlings was busy bathing in the shallow water on one edge. Looking across the Quags the other side, we noticed a large gathering of Swallows flying round hawking for insects behind the beach.

Further along the track, we spotted several chats on the barbed wire fence on the hillside which on closer inspection turned out to be at least three Whinchats. One was much closer than the others and we had a good look at it through the scope, with its well marked pale supercilium and peachy-orange coloured breast. It kept dropping down to the short grass in the field below, looking for insects. Whinchats are just passage migrants here, stopping off on their way south, probably from Scandinavia. There were one or two Linnets along the fence line too.

Whinchat – there were at least three on the fence

It was time for lunch now, so we made our way back up the lane to the minibus, and headed round to the visitor centre at Cley where we made good use of one of the picnic tables. It was lovely weather to be sitting out, looking across the marshes. A Kestrel was hovering over the grass just beyond the road and a Marsh Harrier flew across and turned inland over the fields, presumably looking for food in the stubbles, where the crops have been newly harvested. A Wood Sandpiper was just about visible on Pat’s Pool from here, but there was a little too much heat haze.

There would be a much better view of the scrapes from the hides, so after lunch we made our way down to Bishop Hide. As we walked through the reeds, a movement caught our eye at the back of the small pool next to the path. We stopped and looked and after a couple of minutes the Water Rail reappeared. We watched it feeding in and out of the base of the reeds along the back edge, a great view of this often very secretive species. 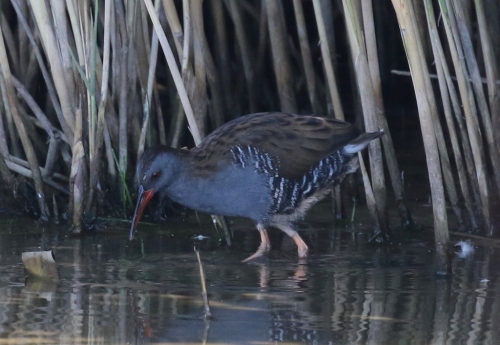 There were two Wood Sandpipers feeding right down at the front of the scrape, not far from the hide, a much better view than the one we had seen distantly over lunch.We could see the pale-spangled upperparts and pale supercilium. There were more Wood Sandpipers further back too – we counted at least eight on Pat’s Pool this afternoon.

Wood Sandpiper – there were two in front of Bishop Hide

There were lots of other waders here as well, mostly Ruff and Black-tailed Godwit. We managed to pick out a couple of Bar-tailed Godwits and a few Knot too. A juvenile Curlew Sandpiper was feeding with a few Dunlin over towards the back and a single Ringed Plover was in the far corner.

The scrape was liberally scattered with Black-headed Gulls too, with many of them asleep on the short grass on the edge of the islands. Looking through them carefully, we managed to find a single Mediterranean Gull in amongst them. It was an immature in its second calendar year, moulting from 1st summer to 2nd winter, and still with black wing tips. Its more extensive black bandit mask and heavier dark bill set it apart from its commoner brethren.

We headed round to Dauke’s Hide next, where we found four Avocets still lingering on Simmond’s Scrape, what looked to be a family party of three browner juveniles and an adult. One of the juveniles came feeding down in front of the hide, sweeping its not yet fully grown bill from side to side through the shallow mud.

Avocet – one of the juveniles, feeding in front of Dauke’s Hide

From one side of Dauke’s Hide, we could see a couple of Green Sandpipers on Whitwell Scrape, with one right down at the front. We watched it feeding in the water by the short reeds. We raced round to Avocet Hide hoping to get it out in the open as it worked its way round, but just at that moment a second Green Sandpiper flew in and chased it off.

Green Sandpiper – feeding at the front of Whitwell Scrape

Looking out of the other side of Dauke’s Hide, across to Pat’s Pool, we had a better view of the Curlew Sandpiper from here. There had been a Little Stint this morning too, on Simmond’s, but we couldn’t find it now. We realised why – it was feeding along the back edge of Pat’s Pool, not visible from where we had been earlier in Bishop Hide. It was clearly very small, with a noticeably much shorter bill than the Curlew Sandpiper and Dunlin.

There were a couple of Reed Warblers and several Bearded Tits in the reeds at the back of Pat’s Pool too, but they were hard to see as they kept disappearing into the vegetation. Having seen everything we hoped to find here, we decided to head back to the Visitor Centre and drive round to the East Bank. A Turnstone flew overhead calling as we made our way along the boardwalk.

We parked at Walsey Hills. There was a lone Common Pochard still on Snipes Marsh, along with a Little Grebe. The Common Pochard bred here this year, raising at least a couple of broods, so this was probably the last of the lingering youngsters from the summer.

Walking out along the East Bank, the breeze had picked up a bit. The reeds were fairly quiet – we heard a brief bout of pinging from some Bearded Tits but they kept well hidden. Looking out across the grazing marshes the other side, we could see a large gathering of Curlew tucked down in the long grass. A Green Sandpiper flew up from one of the pools.

There were a few ducks on the Serpentine, mainly Teal and Shoveler, but including also at least five Wigeon, early returning birds back from Russia already for the winter. Four Canada Geese were in with all the Greylags out on the grass.

Out at Arnold’s Marsh, a single adult Great Black-backed Gull was standing in with the loafing Cormorants on the small island towards the back. There were more Curlews over in the far corner, and several Redshanks, but no sign of any of the terns which had been reported here this morning. We carried on out to the beach for a quick look at the sea – you can’t come all this way and not see the sea – but there was nothing of note on the water and no sign of birds moving offshore this afternoon either.

It was time to head back now, so we turned and walked back along the East Bank listening to the rustling of the reeds. It had been a lovely day out birding along the coast.