Day 3 of a long weekend of Summer Tours today, our last day. It was forecast to cloud over with the chance of a shower from late morning, so we thought we should make the most of the early brightness. But it remained stubbornly warm and mostly sunny with no sign of the forecast thicker cloud all day. We spent the day down in the Brecks.

In order to try to avoid the heat haze which can be a problem there later in the day, we called at Weeting first. We headed straight out to West Hide, where we quickly got onto a Stone Curlew standing in the wild flowers in the middle of the cultivated area. It was not too far from the hide. We got it in the scope, and although there was already a bit of heat haze it was a good view. Then it sat down in the flowers and merged into the vegetation.

Stone Curlew – preening in the flowers this morning

There was also a normal, Eurasian Curlew out in the grass, walking around feeding, given away by its long down-curved bill. Stone Curlew and Eurasian Curlew are not closely related, but both named after their call, the former actually belonging to a family called Thick-knees (but Eurasian Thick-knee doesn’t have the same ring to it). We could see several Lapwings too, and a distant Green Woodpecker – or more precisely its head popping up out of the tall grass from time to time.

There are sometimes a pair of Spotted Flycatchers in the trees behind the hide, so we went out to see if we could find them. There was a fresh breeze blowing through though, and no sign of them this morning. Another Green Woodpecker was calling, and a Goldcrest was singing high in the pines, where we also found a Chiffchaff feeding.

We walked all the way down to the feeders at the end of the pines. A selection of tits and Goldfinches were coming and going initially, but there was no sign of the Great Spotted Woodpeckers we had seen on the live video feed at the Visitor Centre as we arrived earlier. A smart male Greenfinch dropped in and a Nuthatch made several visits to the peanuts. 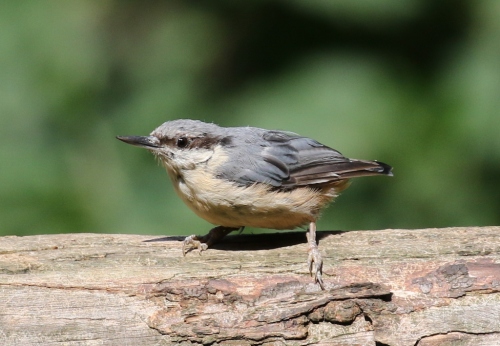 Nuthatch – coming in to the peanuts at the feeders

Back past the Visitor Centre, we walked on to East Hide. There are usually some Stone Curlews here too, but we couldn’t see them at first, just a pair of Eurasian Curlews. But scanning very carefully with the scope, we found a shape hidden in the grass – a Stone Curlew on the nest.

Just as we were all trying to get onto it, one of the group spotted a second Stone Curlew walking in from the longer grass off to the right. We had a much better view of this one as it came out into the open, closer to the hide. It walked quickly, but kept stopping, looking round. It made its way over to where the other Stone Curlew was sitting in the grass and stood nearby, looking round. Then the bird on the nest stood up and they changed over.

Stone Curlew – one of the pair from East Hide

We planned to spend the rest of the morning at Lakenheath Fen, so we drove over there next. As we walked out onto the reserve, several Reed Warblers were flitting around in the reeds by the path, and a Common Whitethroat was singing and song flighting. A Great Spotted Woodpecker flew over, and disappeared into the poplars.

There were already lots of dragonflies here – several Brown Hawkers hawking for insects, and lots of Ruddy Darters perched in the vegetation alongside the path. We could see plenty of blue damselflies too, mostly Azure Damselflies but looking carefully we found a couple of the rarer Variable Damselflies in with them. We saw a one or two Blue-tailed Damselflies here as well.

Variable Damselfly – in with the other blue damselflies by the path

There were good number of butterflies out in the sunshine too – lots of Red Admirals, several Commas, both Large and Small Whites, Meadow Browns. A Large Skipper was resting on the vegetation as we passed.

Large Skipper – resting on the vegetation

We stopped at the viewpoint overlooking New Fen. It was nice gazing out over the reedbed, but it looked pretty quiet  bird-wise – a few ducks, several Coot, and a Moorhen with small juveniles on the edge of the reeds. A Great Crested Grebe was sitting on a nest platform. A distant Marsh Harrier was quartering over the other side of the river.

After a short rest here, we carried on to Mere Hide. There were lots more dragonflies buzzing round over the water in front of the hide, mostly Four-Spotted Chasers. Two Emperor Dragonflies were ovipositing and a Red-eyed Damselfly landed on the blanket weed.

There were not many birds here either. Several Coot and another Great Crested Grebe, this one with a well-grown stripy-headed juvenile at the back of the channel to the side of the hide. We heard a Kingfisher call but unfortunately didn’t see it as it presumably shot past over the reeds somewhere off to the left of us.

Continuing on to Joist Fen, we flushed a couple of Black-tailed Skimmers ahead of us along the path. Sitting on the benches at the viewpoint, looking out over the reedbed, a Cormorant was on its usual post. One or two Marsh Harriers circled up from time to time, the male first. Then the female came in from over the river, carrying food, and was met by a dark chocolate brown juvenile which came up out of the reeds. The female dropped the food for the youngster.

A Hobby was hawking for insects out over the pools in the reeds, distantly at first. At one point it climbed higher and was mobbed by two Common Terns. Later on, the Hobby drifted closer to the viewpoint and we got a much better look at it. A Cetti’s Warbler was singing from the bushes beside the viewpoint, and a Bearded Tit zipped over the reeds just in front of us, but dropped down out of view. After a while, another juvenile Bearded Tit did perch up on the edge of the reeds further back.

We were hoping to see a Bittern here, but there was surprisingly little activity today. We had one very brief flight view, but not everyone saw it as it disappeared behind some bushes and then dropped straight back into the reeds. We waited a while and we were just about to leave when another Bittern flew in over the reeds. It was coming straight towards us and we thought it might fly over the viewpoint but it quickly dropped down into the reeds again, not far from the edge of the channel.

Bittern – flew in and dropped into the reeds by the channel

We scanned along the reeds beside the channel, thinking the Bittern might come out onto the edge, but couldn’t see it. Again, we were just about to leave when it flew out again. Initially it was going away from us over the channel, but then it turned and flew across over the reeds. A good view – well worth the wait.

On the walk back, it was warm now in the sunshine. A Common Tern was hawking over the pools by West Wood. We had a quick stop at New Fen to break the journey, then carried on back to the Visitor Centre for a rather late lunch. We were just about to eat when someone came in to tell us about an impressive caterpillar they had just found on the path in front of the visitor centre. We had a look at it – it was a Puss Moth caterpillar, normally green but this one was dark pinkish, just about to pupate. 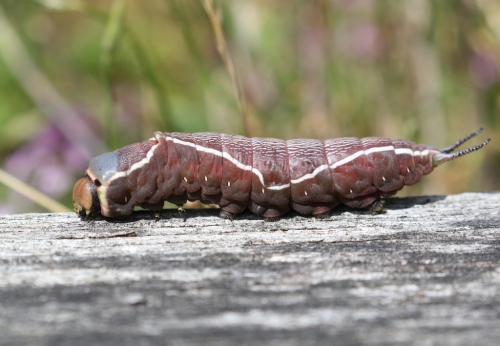 Puss Moth caterpillar – found on the path by the Visitor Centre

After we had finally managed to eat our lunch, we drove back into the Forest. We stopped at the head of a ride, and were surprised to find a big group of people having a barbecue in the small parking area. Presumably quite a fire risk! We wanted to have a quick look for Woodlark here, but thought maybe it would be too disturbed. As we walked down the track, it was all quiet. It was the heat of mid-afternoon, so perhaps unsurprisingly birds might be hard to find now.

Then a Woodlark flew up from the bushes by the track. We could see its short tail and broad round wings. It circled round behind us calling and dropped down by the track again back the way we had just come. We decided to walk back to try to see it, but before we could get there it flew again, and disappeared off into the trees. Still, it was good to see one, even if just in flight. A pair of Stonechats were perched calling in the all bracken beside the track. They had one or two streaky juveniles with them. 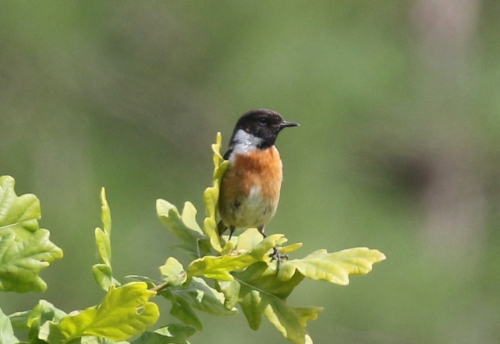 Stonechat – a family were in the bracken by the path

A small skipper feeding on the Vipers Bugloss on the side of the track stayed still long enough for us to get a closer look, revealing the black underside to the tips of its antennae. An Essex Skipper, a new one for the butterfly list for the day.

We called in at Lynford Arboretum briefly as we were making our way past. It was quiet here too, but we had a quick walk round through the trees. We heard a few Siskin flying over and saw one which landed in the top of a holly tree by the cottages. We decided not to linger here too long, as we had one last stop we wanted to make this afternoon.

We drove on to another area of Forest and parked by a large clearing. As we got out of the minibus we could hear a Yellowhammer singing, but otherwise it seemed quiet here too initially. As we walked down the track into the clearing, we looked across to see a bird on the wires over the other side. It was a Tree Pipit, just what we had come here to try to see.

We had a look at the Tree Pipit through the scope from where we were standing and we were just about to walk over for a closer view when it flew. It landed in the top of a tall tree closer to us, but again it didn’t stop long. When it took off again it flew past us and landed in an oak right next to the path. We were looking into the sun, so we tried to walk round, but it dropped out and disappeared by the time we got to the other side of the tree.

While we stood and scanned the trees, one of the group walked a short distance further down the track to look for butterflies and two Woodlarks flew up from the grass. The first flew round behind the oak and we lost sight of it, but the second landed in the top of the tree. We stood underneath looking up at it, as it looked down at us. It had a bill full of insects, and obviously had young to feed somewhere nearby.

The Tree Pipit reappeared in the top of a tree nearby, and we got a much better look at it in the scope now. Then the Woodlark flew down and across to the same tree, landing on a branch halfway down. Now we were not looking straight up from below it, we got a much better view of it too. 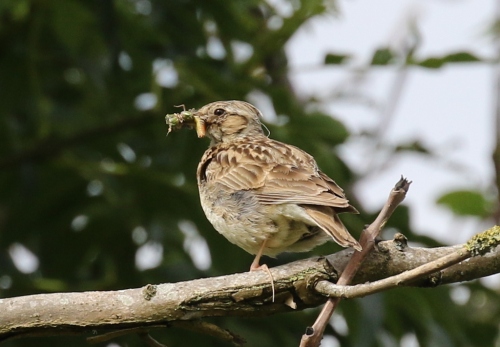 Woodlark – gathering food in the clearing

It had been a very successful last stop, with great views of both Tree Pipit and Woodlark. A nice way to wrap up the trip, it was time to head back.