Day 1 of two days of Summer Tours today. It was a sunny start with clear blue skies and although it clouded over a bit in the afternoon, it remained bright and warm. A lovely day to be out on the North Norfolk coast.

To start the day, we set off east along the coast. It was coming up to high tide, so we called in first at Stiffkey Fen to see if any waders had come in to roost from the harbour. As we got out of the minibus, a Barn Owl disappeared round behind the barns. Probably with young to feed somewhere, it was still out hunting into the morning. A Yellowhammer was singing from the tops of the pines and we could hear the rattling song of a Lesser Whitethroat in the brambles. Having gone quiet while they raised their first broods, the Lesser Whitethroats have started singing again now ahead of a second breeding attempt.

Down along the permissive path, a Blackcap and a Chiffchaff were singing in the copse. We could hear a Bullfinch calling somewhere in the trees ahead of us too. There was a mixed tit flock feeding down by the road, a large group of Long-tailed Tits plus Blue Tits, Great Tits and a family of Coal Tits. We watched the latter feeding in the pines above the road, the juveniles with light yellow cheeks.

Down along the path by the river, there were rather few House Martins around the house on the hill, which seems to be a worrying theme this year. A Cetti’s Warbler was shouting intermittently from deep in the sallows. Half way down, we could just about see over the brambles to the Fen, where four Spoonbills were roosting. We had a better view of them from up on the seawall, where we could see there were three adults and one short-billed juvenile, a ‘teaspoonbill’. The first juveniles have started to disperse from the breeding colony at Holkham, and are then creched at favoured sites along the coast. 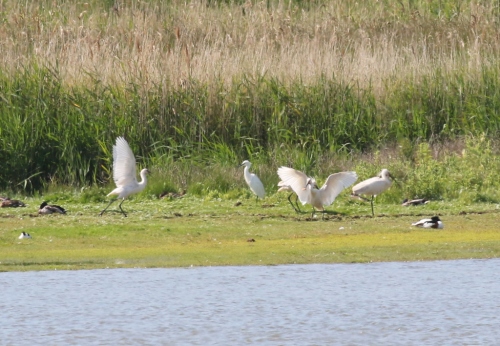 Spoonbills – the juvenile was chasing after one of the adults

A single Sandwich Tern was loafing in with the Black-headed Gulls. Three Mediterranean Gulls flew in from the harbour calling, two adults and a 1st summer, but they didn’t land and flew on west. A Common Tern was fishing in the harbour channel and kept coming past us while we stood on the bank, occasionally plunging down into the water.

There were three Greenshanks on the Fen, roosting over high tide, asleep in the taller vegetation on the island. There were lots of Avocets, with one or two juveniles still. But no other waders on here this morning. Someone came to open up some equipment down by the sluice, and when we asked what it was for, they explained that they were monitoring the movements of the local sea trout population in the River Stiffkey and harbour.

After walking back, we made our way on to Kelling Heath. A Chiffchaff and a Willow Warbler were singing in the car park and the first of many Painted Lady butterflies was basking on a bush. There has been a large invasion in recent weeks from the continent and there are still lots around.

Painted Lady – the first of many, basking on a bush in the car park

We had a quick walk round to see if we could find any Adders. They are warm now though and the only one we came across slithered away as we approached, possibly alerted to our approach by all the footsteps. A Garden Warbler was singing in the blackthorn nearby.

Walking on up the hill, a Woodlark flew overhead calling. Unfortunately it didn’t look like coming down and we watched it disappear away into the distance over the car park. There are lots of Silver-studded Blue butterflies out now and we stopped by a good area for them. There were good numbers of blue males fluttering round over the low heather and we found a mating pair, which gave us a good chance to have a closer look at the diagnostic underwing markings. There were a couple of July Belle moths out here too.

Carrying on round the Heath, we stopped to look at a Willow Warbler perched in a birch tree. A Common Whitethroat was flitting about in the gorse and another Woodlark flushed from the path ahead of us. A smart male Yellowhammer was singing in a small birch tree. We came across one Stonechat, a male, down by the railway cutting, and another pair the other side of the crossing feeding young in the gorse. There were lots of Linnets here but no sign of any Dartford Warblers again – they seem to be struggling this year. 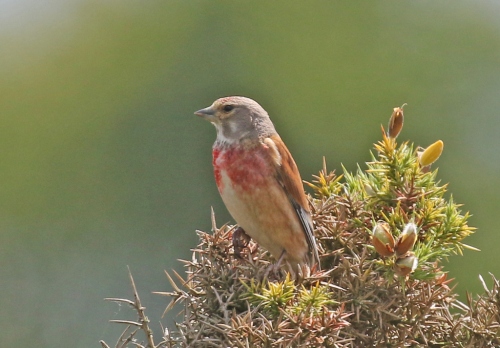 The surprise of the morning came as we were crossing the railway. We looked up at the gorse bushes the other side, to see a Nightjar flying over them. A couple walking a dog had just gone across ahead of us, so had possibly flushed it. It flew along the top of the bushes, then turned and came across the railway a short distance away. It looped round and landed beneath a birch tree by the path back where we had just come. We walked back to see if we could find it but it flew again, and this time disappeared off through the trees.

It was already after midday, so we headed back to the minibus and dropped down to Cley for lunch at the Visitor Centre. While we were eating, we could see the 1st summer Little Gull dip feeding out on Pat’s Pool distantly. Afterwards, we walked out to the hides in the middle. Several Sand Martins were hawking over the reeds.

Out first stop was in Teal Hide –  where, appropriately enough, the first bird we saw was the Green-winged Teal. It was swimming out in the middle of the water with several Eurasian Teal, the vertical white foreflank stripe on the Green-winged Teal setting it apart from the horizontal white-lined Eurasians. It was feeding constantly, swimming round with its head mostly under water, only coming up for air occasionally.

Green-winged Teal – on the left, with a Eurasian Teal on the right

There was a nice selection of other ducks on here too, including Gadwall and Shoveler, the drakes mostly moulting into their drab eclipse plumage already. There were several Shoveler too, with one pair at the back shepherding a large creche of 27 shelducklings.

We spent some time looking closely at the waders here too. There were lots of Black-tailed Godwits of two types – mostly Icelandic birds (subspecies islandica), but two Continental Black-tailed Godwits (nominate limosa) were sporting coloured plastic rings which gave their identity away.  The particular combinations identified them as birds from the very small breeding population on the Nene Washes in Cambridgeshire, having wandered here post-breeding. 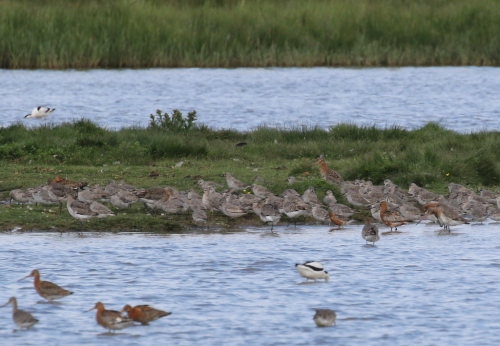 Waders – Black-tailed and Bar-tailed Godwits, Knot and a couple of Avocets

In with the Black-tailed Godwits were a few Bar-tailed Godwits. Most of them were in non-breeding plumage, paler and more heavily streaked above than the equivalent plumage of Black-tailed Godwit, with a more obvious pale supercilium and slightly upturned bill. They were noticeable shorter-legged too, wading with their longer-legged cousins. The Knot with them barely came up to their knees. Again, most were in grey non-breeding plumage but one or two were in their smarter rusty-orange breeding plumage. Several Avocets were feeding in front of the hide, as was a still not fully grown juvenile Redshank.

The waders were all very jumpy and kept flying up. We soon found out why when there was another commotion and we looked up to see a Peregrine flying over with something in its talons. It turned out it had just caught a Redshank flying over behind the hide (hopefully not the youngster we had just seen!). We watched it disappear off east – possibly one of the birds from Cromer church. 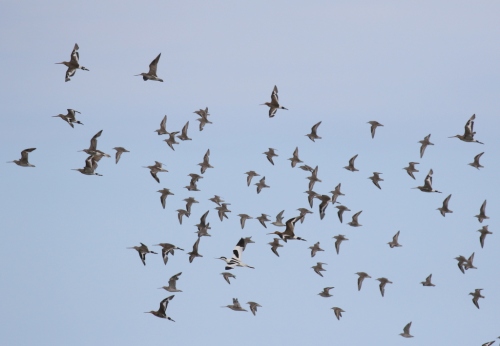 Waders – spooked by a Peregrine hunting over the scrapes

Back at the Visitor Centre, we headed off back west, stopping again on our way at Wells. As we parked and got out, we could hear the raspy call of a Grey Partridge in the field next door, but couldn’t see it in all the growing crop. Scanning the islands, we found three more Spoonbills, one of them another juvenile, lurking in the vegetation. When a fourth Spoonbill flew in, it dropped down in the near corner of the pool, down close the track, so we walked down for a closer look. 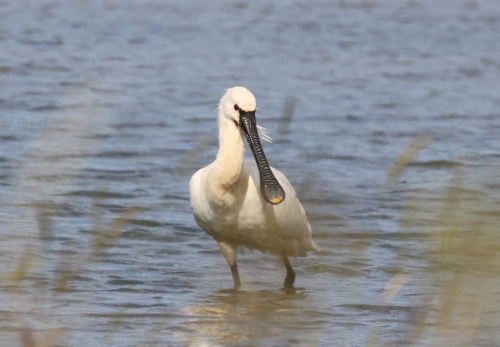 Spoonbill – feeding in the corner of the pool by the track

The Spoonbill was busy feeding, with its head down, sweeping its bill from side to side in the water as it walked. When it lifted its head, we could see its yellow-tipped black bill, an adult, and the bushy nuchal crest and brownish wash on the breast marked it out as a bird in breeding condition. We had a nice view of it before it flew again and went right to the back of the pool.

The pools here have been very good for waders recently and, although there was nothing today which we hadn’t already seen at Cley, there was still a nice selection. A large flock of Black-tailed Godwits were out in the middle, occasionally getting spooked and whirling round overhead. A lone bird, smart in rusty breeding plumage, was feeding on its own in the corner. Several Redshanks flew back and forth, and there were lots of Avocets and Lapwing in the grass.

A small group of Egyptian Geese were loafing in the grass close to the track, and there was a good selection of other wildfowl. As we were about to walk back, a Sedge Warbler started singing and flew up to the front edge of one of the hawthorn bushes to pose. We had a good look at it through the scope, with its bold white supercilium. Then it was time to call it a day and head for home.