Back in early October, a number of Parrot Crossbills appeared in Shetland. Like other crossbills, this is an irruptive species, occasionally moving south and west out of their normal home in Scandinavia and further east in response to food shortages. The last major irruption was in late 2013 and it seemed like we might be on for another big arrival this winter. However, as we moved through October the invasion seemed to fizzle out in the Northern Isles.

Then on 23rd November, a report emerged of 6 possible Parrot Crossbills at Santon Downham, down in the Brecks on the Norfolk/Suffolk border. It took a couple of days before they were seen again and their identity was confirmed, but since then the numbers there have grown steadily. At the time of writing, the largest count so far has reached 42!

I finally managed to get down to see them on 28th, when there were already over 30 Parrot Crossbills present. As soon as I arrived, they were to be found feeding in a small clump of Scots Pines close to St Helen’s car park. They are great birds to watch – snipping off cones with their massive bills, then carrying them to a nearby perch. There, they hold them in one foot and start to attack them, using their distinctive crossed mandibles to lever open the scales before extracting the seeds with their tongues. Periodically, they will pick up the cone with their bill, rotate it, grab it again with their foot and start to work on the scales on the other side.

Parrot Crossbills can be hard to see when they are feeding quietly in dense pine trees – the only clue to their presence is often the sound of pine cones being dropped once they are finished with them. It is only when they suddenly fly out from the trees where they are feeding, calling loudly, that you can appreciate how many are really there.

I watched the Santon Downham Parrot Crossbills for several hours on the morning of 28th, feeding in the pines, loafing around in a nearby oak or some bare poplars nearby and coming down to drink. A few of the photos from that morning are below. 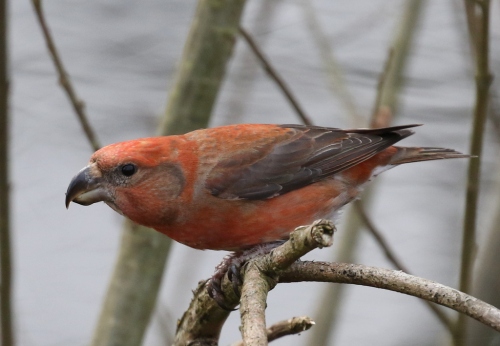 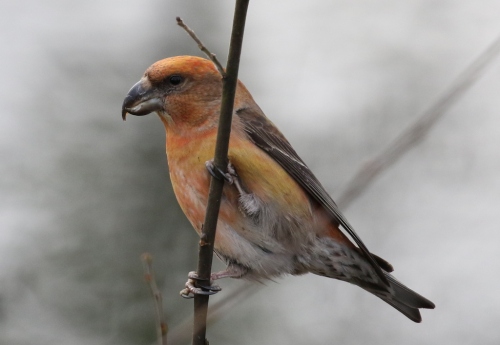 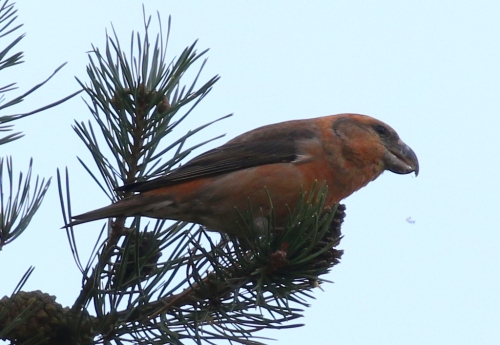 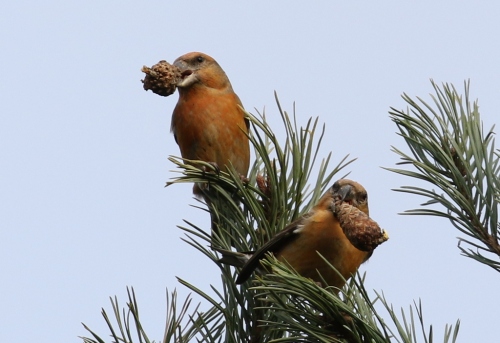 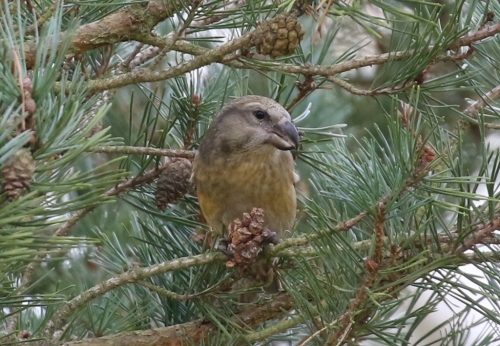 As well as the Parrot Crossbills at Santon Downham, other flocks have since been found in Berkshire and Suffolk. It seems like there may well be more yet to be found elsewhere and any large block of pine trees is worth checking to see if there may be any Parrot Crossbills there.

In the invasion of 2013/14 the Parrot Crossbills stayed well into March, so with a bit of luck this year’s birds might be around for a while yet, if you want to come and see them for yourself.

Like Loading...
This entry was posted in Brecks and tagged Brecks, Parrot Crossbill, Santon Downham. Bookmark the permalink.