No a tour but a family holiday. A ‘busman’s holiday’, because there are always opportunities to go looking for birds and other wildlife, even in the Mediterranean in midsummer! We had been to Majorca just a couple of years ago, but it is still a great place to revisit. This gave us an opportunity to visit a few different sites and try to get better photographs of some species.

Balearic Warbler is one of the key species to see on any visit to Majorca, as they are endemic to the Balearic Islands. They are most easily seen in early spring, when the males are singing, and at other times they can be very skulking. They live in the low scrub, garrigue, often close to the sea, and feed very low down or on the ground in the dense thorny bushes, generally below knee height.

We saw several Balearic Warblers on our last visit but, being July then too, they were very hard to photograph. This visit, it looked like it would be the same story until we stumbled across a male collecting food along a path through the coastal scrub one morning. We followed it as it flew across and disappeared into a clump of bushes, before flying out with a faecal sac – they were clearly nesting there. Quietly standing a short distance away from the bushes, concealed behind a large rock, we were treated to fantastic views of the two adults as they came in and out with food. 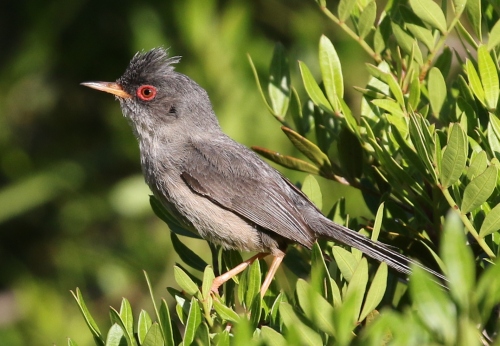 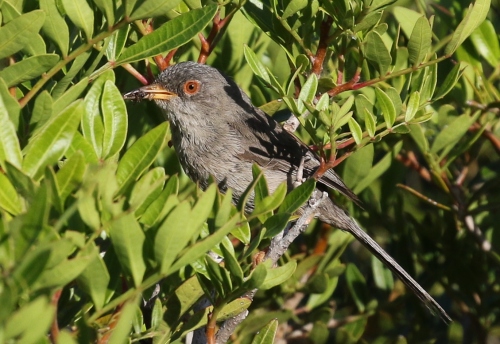 Moustached Warbler breeds very locally around the Mediterranean and this is a great place to catch up with them. This was another species we wanted to get better photographs of, although they seemed to be harder to find at s’Albufera in 2017. There was a lot less vegetation in the main channel this year, where they had been very obvious on our last visit, collecting food.

Fortunately, we found a couple of families feeding young along a reedy channel further into the reserve. They were mostly very low down in the reeds, but we did get some nice views of them in the end.

Another species we wanted to spend some time photographing on this visit was Eleonora’s Falcon. This species breeds on islands in the Mediterranean, with a delayed breeding season to coincide with the southbound autumn migration of small birds which it catches to feed to its young. They can be found in several places around Majorca, but we spent a couple of very pleasant afternoons watching them zooming around the rocky cliffs on the Formentor peninsula. Fantastic birds! 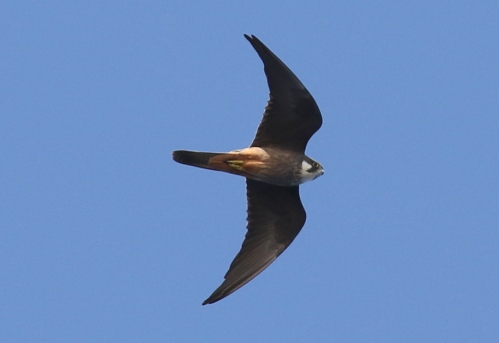 A trip up into the Tramuntana Mountains on one morning produced a nice selection of other raptors. This is a good place to see both Black Vulture and Griffon Vulture and we saw several of both, rather distant initially but then better views overhead as we stopped at Mortitx on our way back down.

Mortitx is the release site for the project to reintroduce Bonelli’s Eagle to Majorca and we managed to see a distant immature bird here. It is a long walk down into the valley to the best area for them and it was the middle of the day when we stopped there – too hot to walk all the way in!

Moltoni’s Warbler was the other target species for us in the mountains. We had seen several on our last visit, but they proved much more difficult this time. We did see a couple of them, but we were perhaps a week late this year, as we had managed to catch them feeding recently fledged young last time.

Since our last visit, the Spotted Flycatchers breeding on the Balearic Islands, Corsica and Sardinia have been split out as a separate species by the IOU, with the English name of Mediterranean Flycatcher. So, well worth looking at again. They are very similar but rather paler and more sparsely streaked below than our Spotted Flycatchers. Fortunately they are very common – and very charismatic birds to watch too. 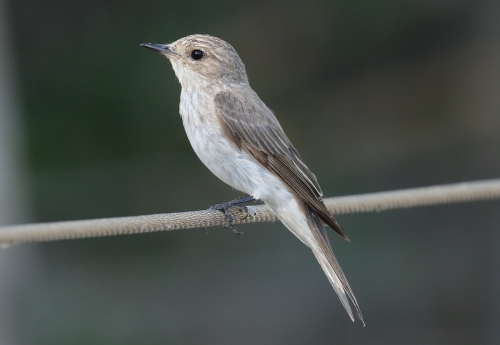 Balearic Woodchat Shrike is still just a race of the more widespread Woodchat Shrike, subspecies badius. It is rather locally distributed on Majorca, although we saw several at Son Real one afternoon, which appears to be a good site for this subspecies. The light was not great for photography, so here is a good reason to go back to Majorca, to get better images of these birds.

One of the other highlights of our visits to Majorca has been watching the herons and egrets at s’Albufera. There is a large mixed breeding colony in the trees by the main channel here and the stone bridge provides a great vantage point to watch them at close quarters, flying in and out of the colony. Great for photography!

Glossy Ibis was a real feature amongst the herons this year. We didn’t see any on our visit in 2015, but there were several around the colony and apparently they have bred here this year.

In with the constant stream of Cattle and Little Egrets, this is a great place to see Squacco Herons and Night Herons too.

Squacco Heron – flying back to the breeding colony 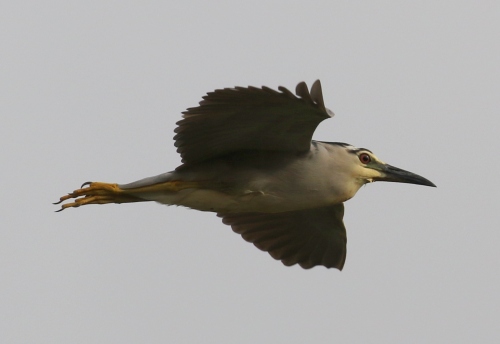 Night Heron – over the stone bridge in the morning

There are also smaller numbers of Purple Herons and the odd Grey Heron here too, but they don’t tend to fly along the channel. However, we were lucky to have a Purple Heron fly right over us as we explored along one of the paths beside the channel. We also saw a couple of Little Bitterns at s’Albufera, but they were not as obliging as on our last visit – a male which flew in and landed on the edge of a reedy ditch very close to us, but partly obscured by reeds, and a more distant female along the main channel. 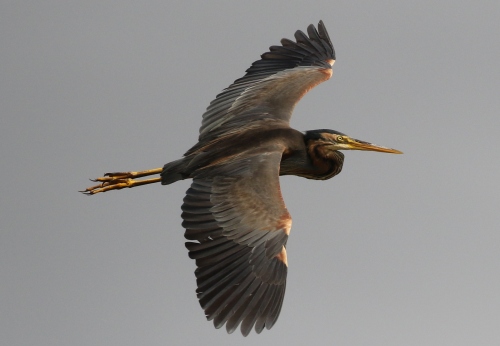 Purple Heron – circled over us by the main channel one morning

The reserve here is a great place to get close to several other Mediterranean wetland species. Red-knobbed Coot, Purple Swamphen and Red-crested Pochard were all reintroduced here in the 1990s after having died out in previous years. The first two species in particular can be seen fairly easily here these days. As well as plenty of these, we also saw Red-crested Pochard and a pair of Marbled Duck too at s’Albufera, 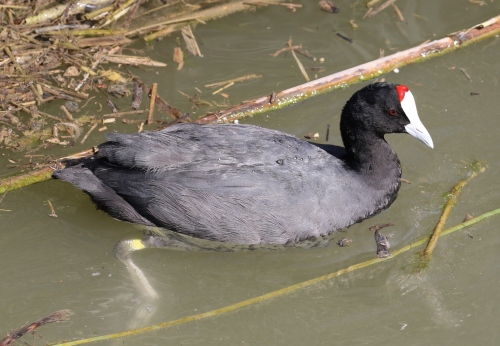 S’Albufera is also good for waders. It is a great place to watch Kentish Plovers and Little Ringed Plovers in front of the hides. A couple of the pairs of Kentish Plover had very recently hatched young – little more than a ball of fluff on ungainly long legs!

Kentish Plover – a male, in front of one of the hides

We saw various other species of waders both here and at Salobrar de Campos, the saltpans in the south of the island. The first few migrants were coming through – the highlights being a single Spotted Redshank and a single Curlew Sandpiper, along with more Green and Wood Sandpipers, plus Curlew and Greenshank.

Black-winged Stilts are found on all the wetlands. Salobrar de Campos is a great place to photograph them, as they fly overhead noisily protesting at your presence! 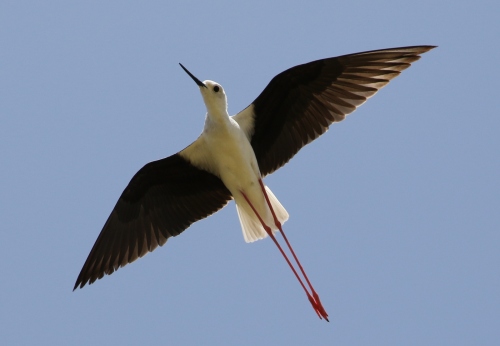 We saw several Audouin’s Gulls bathing in the main channel by the path out to s’Albufera in the afternoons, but the best place to get close to them was on the beach at Port de Pollenca in the evenings among the empty sun loungers! The gulls come down to look for scraps after the crowds have thinned out and can be very obliging here. 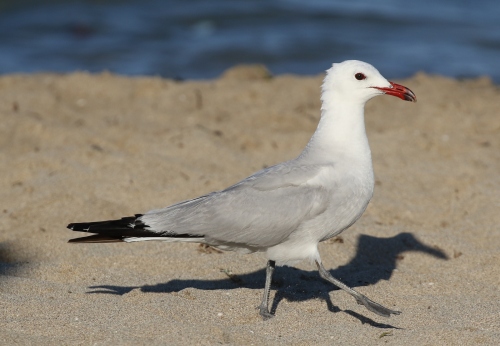 Aside from all the speciality species and wetland birds, there are also many other regular Mediterranean species to be seen here. Thekla Larks on the Spanish mainland can be hard to separate from the confusingly similar Crested Lark, but on Majorca there are none of the latter making the identification much more straightforward!

It is always a pleasure to watch Bee-eaters and there were plenty around s’Albufera and the neighbouring areas.

That is just a small selection of the birds which we managed to see in a week on Mallorca. The final list for the holiday tallied up to 98 species (plus a White-cheeked Pintail – presumably recently escaped from somewhere!). That is a very respectable total for midsummer – and we even managed to find plenty of time for relaxing by the pool in the heat of the day! It is a great place to visit and we will be back…