There is a tradition in certain birding circles for New Year’s Day, which sees birders heading out to make a start on their ‘Year List’. On the 1st January, all species become ‘year ticks’ again, so there is an incentive to see commoner birds as well as rarer ones once more. Even though we are not obsessive year listers, we decided to head out on New Year’s Day this year to see how many species we could see.

The weather forecast was dreadful, rain all day and increasingly blustery, cold north winds. Unfortunately, for once, the Met Office turned out to be right. Not ideal birding conditions. Undaunted, and armed with waterproofs, we set out to see what we could see.

A Little Owl sheltering under the roof of a barn was a good start, given the conditions. A stop at Holkham produced 22-23 Shorelarks out on the saltmarsh and the regular Black Brant hybrid with a small group of Dark-bellied Brent Geese there too. There were a couple of small groups of Pink-footed Geese by Lady Anne’s Drive and a party of 36 White-fronted Geese on one of the grazing meadows by the main road. A Great White Egret out on the freshmarsh was a nice bonus. 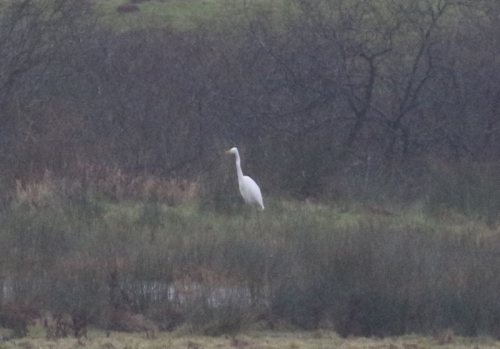 Great White Egret – out on Holkham Freshmarsh in the rain

Titchwell was our next port of call. A Chiffchaff was flitting around beside the path from the car park but there were no Bramblings around the visitor centre as we walked out, so we decided to have a look on the way back. A Water Rail was feeding in the ditch by the main path and, following a tip off, we found a Jack Snipe on the Thornham grazing marsh pool. While we were watching it, it was promptly joined by a second Jack Snipe! The Water Pipit was slightly less accommodating, lurking in the vegetation at the back, but at least we managed to find it.

We hurried out to the sea to try to collect some seaduck. There have been large numbers of Long-tailed Ducks and Velvet Scoter off the coast this winter, but they were hard to find today in the swell and with rain and spray driven in on the wind. A couple of Velvet Scoter helpfully flew past, flashing their white wing patches, and an Eider flew in and landed close inshore. It took some time, but eventually we managed to find some Long-tailed Ducks and then beat a hasty restreat.

The pools at Titchwell gave us a really nice selection of waders, as hoped. A Greenshank helpfully flew up from the back of the tidal pools, and the unseasonal Little Stint on the freshmarsh was distinctly unexpected at this time of year. We got the set of dabbling ducks, including several smart Pintail, and a detour round via Patsy’s Reedbed added Coot and Tufted Duck.

Stopping to eat a nice hot pasty back at the visitor centre, a Brambling appeared at the feeders and a Mealy Redpoll was perched low down on one the alders where it was easy to see. Even better, a pair of Bullfinches flew over calling and landed in the top of a tree briefly. This can be a tricky species to find on a day like today.

Thornham Harbour was our next destination. As we got out of the car, the flock of wintering Twite helpfully flew up from the saltmarsh by the car park. We walked round to get a better look at them and could hear Spotted Redshank calling. It was hard to work out where it was coming from at first, in the wind, but a look from the old sluice revealed two Spotted Redshanks calling quietly to each other on the mud just below. It was not a day for photography today, but we couldn’t resist getting the cameras out, as they were posing so well!

Spotted Redshank – 1 of 2 at Thornham Harbour

A drive round through the farmland inland and we managed to find various flocks of finches and buntings, including a few Corn Buntings. Even better, while searching through one of the flocks, we found several Tree Sparrows perched up in a hedge – a hard bird to see in Norfolk these days! We were told about some geese feeding in a cut beet field nearby and drove round to find a large flock of Pink-footed Geese. A quick scan through them produced the hoped for Tundra Bean Geese – two of them, their bright orange legs showing up well despite the dim light.

There was olnly an hour or two of light left, so we had to decide where to finish the day. Holkham Park seemed like a good option, out of the wind and with the possibility of a few woodland birds. The trees produced Treecreeper and Goldcrest. The lake added Common Pochard to the day’s list, although a Ferruginous Duck x Pochard hybrid was not eligible for inclusion. Walking back to the car, a Grey Wagtail flew away over the trees calling, another bonus. Then, with the light fading, we headed for home. A drive round some suitable farmland on the way produced a Barn Owl out hunting – a great way to end the day.

Back at home, with a nice hot mug of tea to warm us up, we went through the list and added up the day’s total – 110 species. This was a great number, particularly given the weather conditions. It just goes to show, you really can see birds in any weather if you put your mind to it!

The following day, we went out again (albeit a late start today!), to try to catch up with a few of the species we didn’t have time to get to on the 1st. The weather was much better, still cold and windy, but with sunny spells and only the odd shower. Unfortunately, we missed the Waxwings at Cromer – they had flown off by the time we arrived. A Purple Sandpiper at Sheringham was some compensation on the way back, and a male Stonechat feeding out on the rocky sea defences among the waves was a bit of a surprise.

The blustery north winds had blown in several Glaucous Gulls and one was roving up and down between Blakeney and Salthouse. We eventually managed to catch up with it on Simmond’s Scrape at Cley, a biscuit-coloured juvenile, with pale wingtips. We were lucky, as it didn’t stay here long. A Water Pipit was feeding nearby, on the mud on the edge of the scrape. 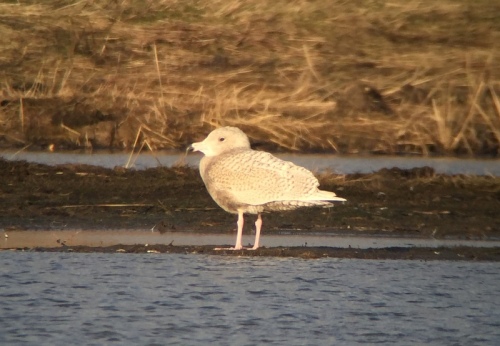 Glaucous Gull – a juvenile at Cley

Round at Salthouse, we walked out to see the flock of Snow Buntings which have been frequenting the beach here this winter. There were about 40 of them there today, a mixture of Scandinavian and Icelandic birds.

On our walk back to the car, the Glaucous Gull had reappeared on the pool at the end of Beach Road. We had a quick look at it before all the gulls flushed and it disappeared out onto the sea. As we drove back to the main road, we spotted another juvenile Glaucous Gull flying in from the east over the fields, our second of the day!

On the drive back home today, with the light fading, we spotted several Woodcock flying out of the trees from the car.

It just goes to show, winter birding can be exciting in Norfolk, whatever the weather!