A three day Private Tour this week, we were hoping to catch up with some early autumn migrants. Day 1 today was cloudy but hot and humid. After a late morning start, we spent the rest of the day exploring the east end of the North Norfolk coast.

Our first stop was at Cley. We drove round to the beach car park and walked out to the viewing screen where the old North Hide used to be. There was not a huge number of waders on here today, but there was still a very good selection. We quickly picked up three Little Stints, in one of the bays half way back, which then walked out of view behind the reeds and we didn’t see them again!

A Wood Sandpiper was calling when we arrived, but we couldn’t see it at first. Eventually it appeared from behind the reeds down at the front and walked out into full view. A very elegant little wader, and a great one to see. Even better, at one point it walked past a Green Sandpiper giving us a nice comparison between the two species.

Wood Sandpiper – at the front of North Scrape

We heard a Spotted Redshank calling overhead and thankfully it dropped in to the front of the scrape. It stood calling for a few seconds, while we watched it, then ran across in front of us to joined a second Spotted Redshank which had appeared nearby. Both were smart winter plumage adults. They didn’t linger long though, and flew off west calling again. A Greenshank remained asleep nearby throughout.

A scan of one of the more distant islands produced a Curlew and a couple of Common Snipe. However, a small wader asleep next to them looked more interesting, even though it was back on to us. When it was disturbed by a passing Redshank our suspicions were confirmed, it was a juvenile Curlew Sandpiper. Together with several Ringed Plover and Dunlin, that was an impressive haul of waders for our first hour or so.

We made our way back to the car to head round to the other side of the reserve. A couple of Common Buzzards circled up over Blakeney Freshes. The Wheatears and Whinchats though, which have been around the Eye Field in the last week, appeared to have moved on.

From round at Teal Hide, there was plenty of activity on Pat’s Pool. As well was the usual Black-tailed Godwits and Ruff, there were lots of small waders today. We quickly picked out more Curlew Sandpipers in with all the Dunlin. They were hard to count, as many of the birds were feeding behind the main island, but we eventually got to at least 13. All were juveniles in a variety of hues, one in particular with a rather bright orangey wash across its breast. Further round, a single Little Stint was hiding in amongst all the lumps of mud. At one point, it was in the same view as a Dunlin and two Curlew Sandpipers, giving a great side by side comparison.

There was more to see than just waders here. A young Hobby was hawking for insects over the reedbed. A juvenile Water Rail scooted across in front of the reeds at the back of the scrape, unfortunately too quickly for everyone to get onto it. A Kingfisher called and flew in towards the hide, landing in the trees briefly, before zooming off again. A couple of Reed Warblers were feeding in the cut reeds just outside the hide.

There seemed to be Common Buzzards on the move today. We looked up above the hide at one point to see a kettle of five circling high overhead, which then drifted off west. 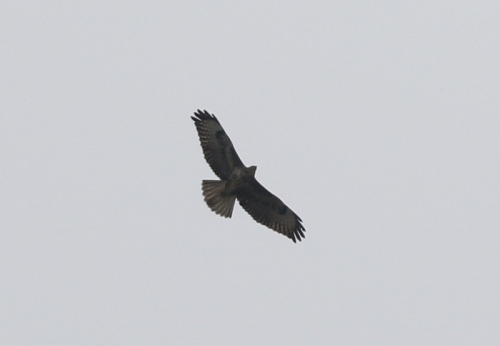 Common Buzzard – on the move, five circled high over the hides

We had a late lunch at Iron Road. The pool here has been very productive for waders in the last week or so, but was surprisingly devoid of life today, so we didn’t linger here. Instead, we walked out to Babcock Hide, past all the Greylags and Egyptian Geese on the grazing marshes. A Whimbrel called high to the east, but it was heading away from us and we couldn’t pick it up.

The water level has gone down nicely on Watling Water, exposing lots of mud. A Common Sandpiper was a nice addition to the day’s list, hiding on the edge of the reeds at the back today. There were several more Common Snipe and Ruff here too, as well as three or four Little Grebes busy diving in the deeper water. On our way back to the car, a couple of Bearded Tits were calling from deep in the reeds along the ditch right beside the path, but wouldn’t show themselves.

The wind had swung round to the east and with the low cloud we thought it might be worth looking to see if any passerine migrants had arrived. We drove round to Salthouse and walked out to Gramborough Hill. Another four Common Buzzards were circling over Salthouse church.

The bushes at Gramborough were rather quiet, just a Stonechat and Chiffchaff, as is often the way – it is boom or bust here! We did get our first Wheatear of the day, a rather richly-toned male with a deep orange breast, feeding on the edge of the grazing marshes as we walked out. On the way back, it flew out across to the shingle ridge and was joined by a second Wheatear.

Wheatear – a rather rich orange-breasted male

It was starting to get a little misty now, so with a light wind blowing onshore we had a speculative look out to sea. At first it was very quiet we saw nothing more than a few of the local Cormorants, but after a minute a bird appeared flying very low over the sea on the edge of the mist. Through the scope we could see it was a Manx Shearwater. Unfortunately, it was too distant and too murky for everyone to get onto it, so we gave up and headed back to the car.

Our final stop of the day was at Kelling. Walking down the lane to the Water Meadow, there were several birds in the thick hedges. We stopped to watch a couple of Chiffchaffs flicking around in a tall hawthorn. We heard Bullfinches calling and two flew out of the brambles, over our heads and back into the tall trees behind us. A Yellowhammer came up out of the beck beside the path.

The Water Meadow itself has all but dried out, so we carried on down to the Quags. We were almost at the beach when we came across a flurry of activity. We flushed a couple of Reed Buntings from the long grass. A few Linnets were calling from the brambles. Then a Stonechat flew from the Quags across in front of us, swiftly followed by two Whinchats.

Stonechat – perched up nicely in the brambles nearby

The Stonechat perched up nicely in the brambles, but the Whinchats flew off into the field beyond. We did manage to get a nice view of one Whinchat perched on the top of a bush.

Whinchat – rather less obliging than the Stonechats

We walked a short distance up the hill, but there were no other obvious migrants in the coastal bushes. Another Wheatear flew along the shingle ridge and perched on the top in the distance. A juvenile Gannet drifted past offshore. We were out of time, so we turned to head back. The Whinchats were back by the path and flew ahead of us as we walked along, accompanied by two Common Whitethroats which appeared out of the brambles.