While they can be seen throughout the winter, late Summer and early Autumn is the best time of year to witness the huge flocks of waders swirling around over the Wash. Only on a few days each month on the highest tides are the waders forced off the mudflats and onto the neighbouring RSPB reserve, when the spectacle reached its peak

Today, the tide was not quite at its highest, which meant that not all the waders came off the Wash. But still we were treated to quite a spectacle, with at least two Peregrines stirring up the waders as they gathered in huge flocks, tens of thousands strong, ahead of the rising tide. Stunning! 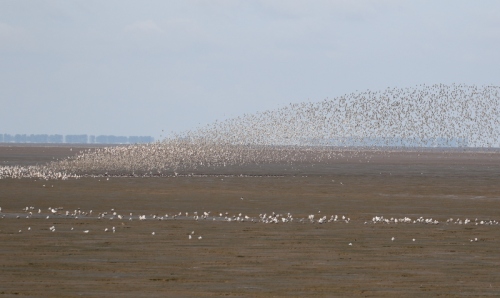 Huge flocks of waders swirl over the Wash

While the largest numbers of waders are Knot and Bar-tailed Godwit, a wide variety of different species use the Wash, big flocks of Oystercatcher and smaller number of Avocets, Curlew, Black-tailed Godwit, Grey, Golden and Ringed Plover, Redshank, Sanderling, Dunlin and Turnstone. At this time of the year, many of the waders are still in smart summer plumage, as they gather on the Wash to moult at the end of the breeding season.

It is possible to see other things on the rising tide too. Lots of gulls and terns gather on the edge of the Wash and we saw two different Black Terns today in with them, a moulting adult and a juvenile. A Woodlark flying along the shoreline was even more of a surprise!

Black Tern – this one a moulting adult

When the waders gather on the pits, there is a good opportunity to see them up close. They can be packed tight in flocks of hundred and thousands around the small islands. 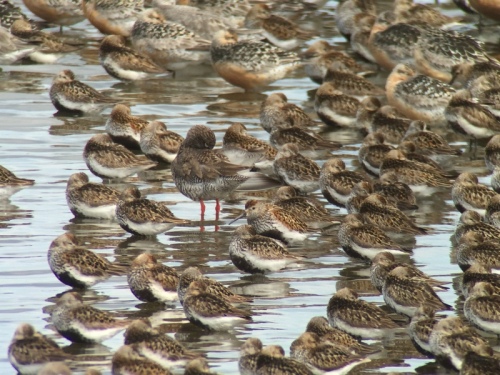 Searching through them, it is possible to find other species here which can be trickier to pick out among the vast throngs out on the Wash. Today, we had 10 Spotted Redshanks on the pits and two Greenshank flew in too. A Little Stint on the shoreline was dwarfed by the neighbouring Dunlin, and a careful scan through the vast masses of the latter revealed at least 6 Curlew Sandpipers, all adults still sporting the remains of their rusty summer plumage, on their way south from Siberia.

The real bird of the day managed to conceal itself in with the Dunlin for over an hour, sitting down hidden in the throng. Eventually it gave itself away – a White-rumped Sandpiper from North America. 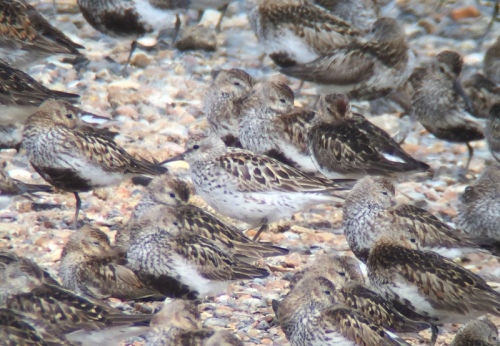 White-rumped Sandpiper – in with the Dunlin

When the White-rumped Sandpiper finally woke up, it was possible to see its white belly, lacking the black patch shown by the summer plumaged Dunlin all around it. It also had a shorter, finer bill, only slightly downcurved. Its flanks were finely streaked with a couple of black chevrons and its upperparts were a little greyer, with brighter rusty edges to the upper scapulars. When it preened, you could see the distinctive white rump, lacking the broad black stripe through the middle shown by most other small waders – you can see it best in the video below. A smart bird and a nice way to round off another exciting morning.

If you would like to join us to enjoy the Snettisham Wader Spectacular this year, current dates for the diary when the tide is at its highest are:

More dates may be possible, subject to tides and demand. Please contact us for more information. We look forward to seeing you here.