A Private Tour today, up into NW Norfolk, for a regular who wanted to do something a bit different, avoiding the main nature reserves. It was a bit misty at first, but it was forecast to burn off during the morning and then be mostly bright and dry.

We headed up towards Holkham first. On the way, a large shape perched on the top of a barn in the mist was a Red Kite. We stopped to look at it and could just make out a second Red Kite circling in the murk further back. A tractor was cultivating the field opposite and lots of Black-headed Gulls were following behind. Not surprisingly these days, a quick look revealed a single Mediterranean Gull in with them. Through the scope, we could see its jet black hood extending further down the back of the neck than the chocolate brown hoods of the nearby (and inappropriately named!) Black-headed Gulls. As the tractor got to the end of the field, the Mediterranean Gull took off and flew past us, flashing its pure white wing tips.

While we waited for the mist to clear, we stopped briefly at Holkham. We could see lots of white shapes in the trees across the grazing marshes – Spoonbills. Through the scope, we could see their spoon-shaped bills. There were lots of Cormorants, Little Egrets and the odd Grey Heron in the trees too.

A male Marsh Harrier circled low over the reeds, with prey in its talons. It seemed to be waiting for the female to come up, to accept a food pass, but there was no sign of her flying up to meet him. Eventually he gave up and flew off, landing down in the grass in front, presumably to eat his catch himself.

It was starting to brighten up a little now, so we headed off inland, to explore the farmland behind the coast. At our first stop, there were several Skylarks singing and a little flock of Linnets flew up to land on the wires. A pair of Red-legged Partridge were on one side of the road and a pair of Grey Partridge on the other side. A couple of Brown Hares ran off through the grass.

A large stack of bales was adorned with Shelduck on the top of it. We counted ten birds in total – always an unlikely place to see them! A little further down the road, a pair of Shelduck had taken up residence on a large puddle on the edge of a field with their ten shelducklings. Again, it is not entirely an ideal place for them, as there is no other water around here if and when the puddle dries up. 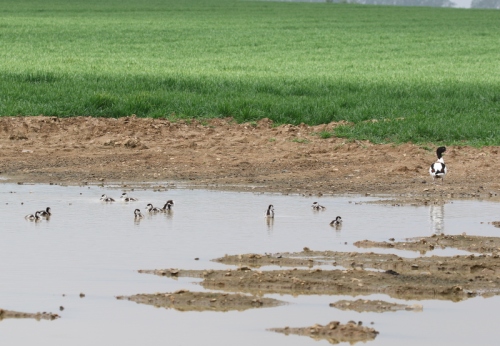 Shelducks – the female with her shelducklings on a farm puddle

We turned into the entrance to a farm track and a pair of Grey Partridge stood on the verge right beside us. They walked quietly into the grass, before flying off across the field as we pulled up.

Grey Partridge – this pair were on the edge of a track

This is a high point, a good place to scan the surrounding countryside, so we stopped here for a while. There were a few raptors out this morning, but it was still a bit cloudy and hadn’t really warmed up yet. A Marsh Harrier quartered the field in front of us. A couple of Common Buzzards circled up distantly. Another Red Kite circled over.

A little group of gulls came up over the fields towards us. In with several Black-headed Gulls and a young Herring Gull were a couple more Mediterranean Gulls. As they came overhead we could see the light shining through their translucent white wingtips. Mediterranean Gulls really do turn up anywhere now, even well away from the coast.

Yellow Wagtails used to be a much more common breeding bird in Norfolk, but are increasingly hard to find there days. So it was a nice surprise to find a pair here, flying in and out of a wheat field, calling as they came overhead. At one point, the bright yellow male dropped down briefly into a bare field nearby. The numbers of Lapwing breeding on farmland have also dropped dramatically. It was lovely to see a pair displaying, calling and somersaulting. Sadly, even if they do stay to breed here, productivity is normally very low in a modern agricultural environment.

We went for a short walk along the farm track. There were several Common Whitethroats in the hedges, mostly their scolding call gave their presence away. We saw several Yellowhammers too, including a lovely bright male which perched up in a hedge in front of us. 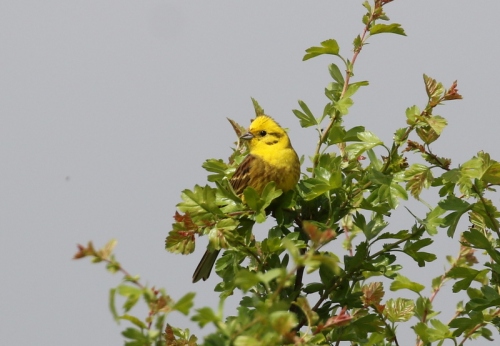 We had intended to make our way slowly towards Choseley, so we were pleased to hear the news that a Dotterel had been seen earlier. There had been a lovely ‘trip’ of up to 28 here in recent weeks, but none had been seen in the last couple of days. When we arrived, there was only one other couple who had been scanning the field in vain. It is a huge field and shimmering with haze over the parched earth – not an easy place to find a single bird. Thankfully, after scanning carefully for a few minutes, we found the Dotterel once it moved. It was working its way across the back of the field, running a short distance, before stopping still, at which point it became very tricky to see again. 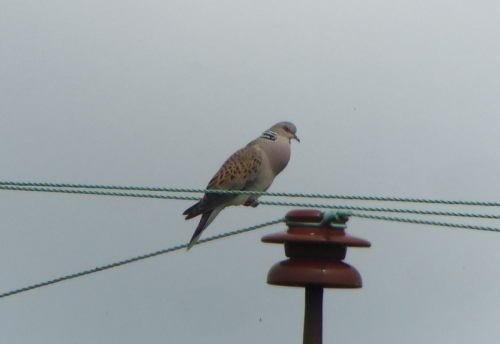 Turtle Dove – our first of the day, purring at Choseley

After that unexpected bonus, we made our way up to the drying barns. When we got out of the car, we didn’t quite know which way to look. A Corn Bunting started singing just back along the road from us and a Turtle Dove was purring on a telegraph post the other side of the barns. We had a quick look at one, then the other, through the scope, in case either should fly off, then stopped to watch both of them at our leisure. We could see the Turtle Dove inhale, puffing out its breast, before purring. Eventually the Corn Bunting dropped back down to the fields beyond the hedge and the Turtle Dove flew off east.

Corn Bunting – singing from the wires at Choseley

With all our main target species here in the bag, we headed off, over to Snettisham next. As we walked out through the Coastal Park, a Sparrowhawk flashed across and disappeared into the trees. There were lots of warblers singing from the bushes – Blackcaps, Lesser and Common Whitethroats, Reed and Sedge Warblers, Chiffchaffs and Willow Warblers. Several Cetti’s Warblers shouted at us from deep in the vegetation.

We walked up onto the outer seawall and looked out across the Wash. The tide was coming in now, but was still quite a way out. Several little groups of Oystercatcher flew past over the mud. A surprising number of Brent Geese were still lingering, out at the water’s edge – it is high time they were on their way back to Russia for the breeding season! A small flock of Black-tailed Godwits flew off inland and dropped down towards the grazing marshes, while we could still see a few out on the edge of the mud.

We didn’t see the large mass of waders at first from here, but a little later something obviously disturbed them from further along, coupled with the now fast rising tide, and we could see a huge cloud of birds swirling round over the Wash before landing back on the mud.

There are a few more dragonflies starting to appear now. We flushed a couple of newly emerged Azure Damselflies from the long grass. Along the bank of the inner seawall we found a Hairy Dragonfly resting in a sheltered spot. As we walked back towards the car, we could hear a Cuckoo calling from the bushes. 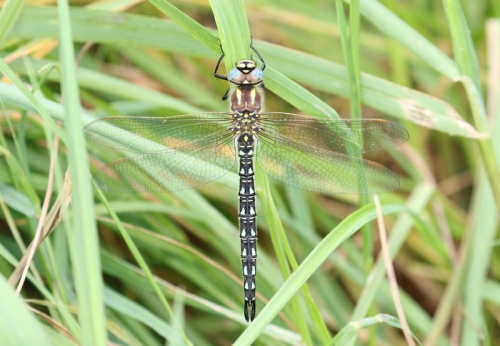 Hairy Dragonfly – resting in the grass

Our final stop of the day was at Holme. We walked along towards the paddocks first and could hear a Turtle Dove purring before we got past the trees. Out in the open, when it started purring again, we found it perched on a dead branch. From here, we could just hear a second Turtle Dove purring a little further over, and the first responded by purring back at it.

Turtle Dove – one of two purring at Holme

A father was out for a walk with his young daughter and stopped to ask what we were looking at. They had heard the Turtle Doves already, so we let them have a close look at one through the scope. It was a sobering thought to think that there might be none left here by the time his daughter grows up, giving the alarming rate at which they are declining.

Otherwise, the bushes in the paddocks were rather quiet this afternoon. However, there was a steady movement of Swifts, flying west through the dunes or over the fields just inland, accompanied by smaller numbers of Sand Martins and Swallows. We had seen a few Swifts and House Martins over Snettisham too, earlier. Some birds are continuing on migration, still on their way.

We got back in the car and drove a little further along the coast, stopping to walk out into the dunes. There was a nice selection of butterflies out now – several Wall Brown and Small Copper as usual. A couple of nice, crisp, fresh Common Blue fluttered around in the grass too. And as we walked along, we flushed a single Brown Argus from beside the path. The wind had picked up a little now and the butterflies were carried away across the dunes as soon as they gained any height, so they were  mostly lurking down in the shelter of the path.

Small Copper – one of several species of butterfly out this afternoon

We walked past the flowers lurking in the grass at first, and had to double back before we found them. There is a small colony of Man Orchids here, so called because the individual flowers on the spike shaped rather like a little hooded stick man. It is hard to see this at a distance, but crouch down and look closely and the flower spike looks like an army of stick men. The orchids are not fully out yet, but they were still great to look at, very smart flowers.

Then it was time to head back. It had been a great day out, not just for birds, but also with a wealth of other wildlife to see.