A Private Tour today in North Norfolk. The main reason for the day was to go to the Harrier roost in the afternoon. That left the morning open for some other birding. When we met up first thing, the mention of Pallid Harrier was met with an enthusiastic response so we decided to start the day up at Snettisham to see if we could catch up with it.

It was a misty morning as we drove west towards the Wash. Several small groups of Pink-footed Geese were flying inland from the coast to feed. There had been a Waxwing by the main road in Snettisham earlier in the morning, but there was no sign of it by the time we got there. A quick drive round the immediate area looking for likely berry bushes produced a pair of Mistle Thrush and a Green Woodpecker, which flew over the road and disappeared into a garden. However, we didn’t spend too long looking as we wanted to get out to the edge of the Wash to look for the Harrier.

The sun was already starting to burn the mist off as we arrived on the seawall. A large cloud of Golden Plover was swirling around out over the Wash and we watched as they settled themselves back onto the mud. 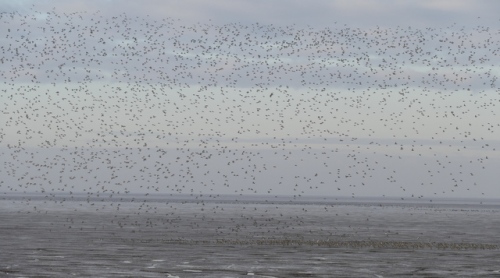 Golden Plover – a vast flock swirling round over the Wash

We made our way quickly down to the southern end of the RSPB reserve, past the last of the pits, where a small crowd had gathered to scan the saltmarsh for the Harrier, although there had been no sign of it so far. Still, it was a glorious morning to be looking out over the vast mudflats of the Wash. The tide was out, but there were still a few waders to see – Bar-tailed Godwit, Grey Plover, Dunlin and Curlew.

Pink-footed Geese – after full moon, spent the day out on the Wash today

A Common Buzzard was perched out on a fence post across the saltmarsh and several Marsh Harriers flew back and forth, but it seemed there was no sign of the Pallid Harrier. It has been present here for over a week now but has been seen most reliably in the afternoon. We wanted to visit the raptor roost at Warham later today, so we had to try our luck at Snettisham this morning. As the sun burnt of the mist and seemed to warm the air a little, the raptor activity appeared to increase.

We decided to have a walk round towards the seawall, but we hadn’t got very far when we saw some signs of excitement among a few people further ahead of us. When we caught up with them, it seemed like it had all been over nothing until somebody spotted a bird of prey sitting on a post half hidden among the Suaeda bushes. We were still looking into the sun, but it appeared to have a pale collar – it was the Pallid Harrier! We made our way up onto the seawall from where the light was a bit better. 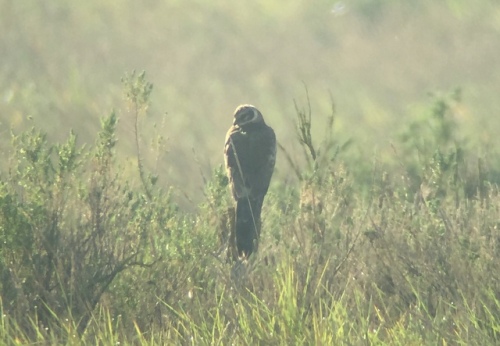 The Pallid Harrier perched on the post for several minutes, looking around. We could see its pale collar and solid dark neck sides (the ‘boa’), and the small pale patches above and below the eye. It started preening and we could see the white patch at the base of its tail. Then it took off and flew low over the bushes – the very pointed wings were particularly noticeable, much slimmer than a Hen Harrier. Then it flew up over the seawall and disappeared over the other side. What a great bird!

While we were up on the seawall watching it, we heard a flutey call behind us – a Woodlark was flying over. As we started to make our way back, our attention was drawn to a Spoonbill out on the saltmarsh on the edge of the Wash. It had disappeared into the vegetation at first, but shortly after emerged again and even put its head up so we could see its spoon-shaped bill. Most of the Spoonbills which were here in the summer have long departed. It is not unknown for one to spend the winter here, but it is still unusual. 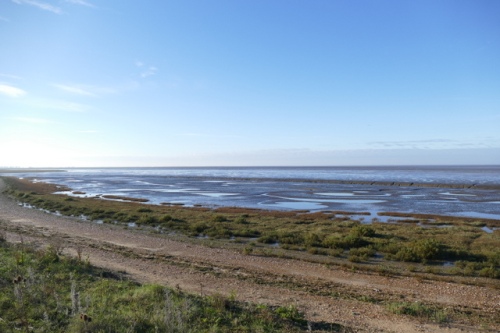 We made our way slowly back, stopping to scan the mud from time to time. With the sun out and blue skies above, it was a stunning view. We could see the vaste hordes of Pink-footed Geese clearly now. We didn’t have a chance to count them, but there have been at least 11,000 here in recent weeks. The Wash is famous for its vast flocks of Knot, but most of the waders were miles out along the water’s edge, given that the tide was out. A single Knot was feeding along the mud along the near edge of the vegetation. 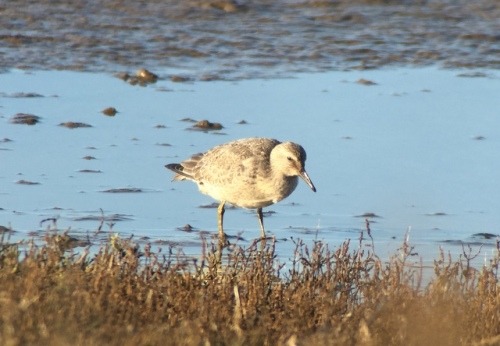 Knot – only one was close in, most were far out over the mud today

There were lots of ducks out on the mud as well. In the tidal channel, below a large flock of Mallard closer to us, we could see a couple of Wigeon. Further out were massed ranks of Teal and a large number of Pintail as well.

As we walked back along the path, the flock of Golden Plover would periodically shoot up into the air and wheel round calling, before dropping back down. Out on the mud, they positively shone in the sunshine, a golden streak across the flats. 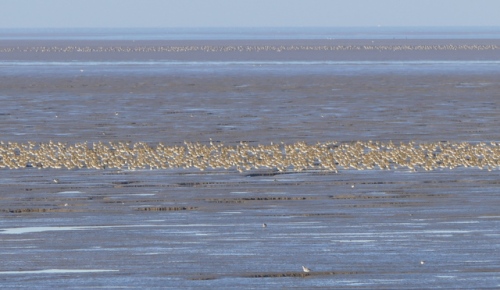 Golden Plover – slowing in the sunshine, out on the mudflats

We stopped to have a look out on the pits. Amongst the Greylags and Mallards, there were several Goldeneye. A smart male surfaced nearby. Further over, looking back into the sun, a spiky-haired Red-breasted Merganser swam away from us and a couple of Little Grebes were diving. In all the excitement, the morning was slipping away so, with one eye on the clock and our plans for the afternoon, we decided to move on.

Heading back round the coast, our next stop was at Thornham. As we drove down to the harbour, the first thing we saw was a couple of Rock Pipits chasing each other around the boats and jetties.

Rock Pipit – on one of the jetties at Thornham Harbour

There has been a little flock of Twite here recently, and we had hoped to catch up with them quickly. We walked out along the seawall towards Holme, and there was no sign of them at first. A couple of Curlew were feeding out on the saltmarsh. Then a little flock of finches flew inland over the path ahead of us, and turned back towards Thornham. A short while later, we heard the distinctive call of a Twite and turned to see three flying towards us. They looked like they might land but, unfortunately turned and flew out across to the back of the saltmarsh.

We stood for a while and scanned the marshes either side. We could see a large flock of small birds, Linnet, out towards the beach. Suddenly a small falcon zoomed in low and scattered all the birds. A Merlin, it raced through and disappeared over the bank towards Holme. Lots of Skylarks and finches flew over to the grazing marshes. A promising looking flock of smaller finches landed in the top of a tree over towards Thornham and despite waiting for a while they seemed to show no sign of coming back our way. Only when we had walked all the way back did they fly off and made their way back to where we had just been waiting!

We didn’t want to waste too much time here, so we made our way back to the car. A couple of Brent Geese were feeding on the saltmarsh right next to the car park. 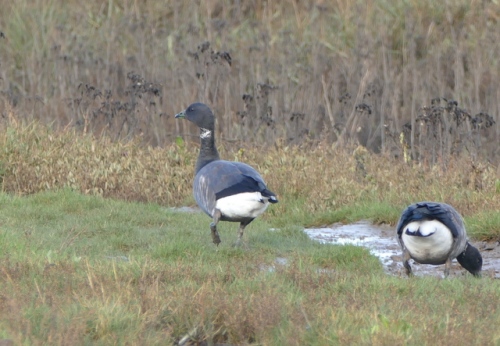 Heading on back east, we took a detour inland off the coast road and up to the hinterland behind Brancaster. There had been a Rough-legged Buzzard reported here earlier in the morning but, several hours later, it always felt like a slim chance it would still be there. We ate our lunch up on the high ground, scanning for raptors, but there was not a trace of it.

Back along the coast road after lunch, we made a quick stop at Holkham. There was an enormous number of Pink-footed Geese here today, out on the grazing meadows. As we had seen at Snettisham, they were presumably day-roosting today due to the full moon. We scanned the wetter fields and could see lots of Greylags and a couple of Canada Geese. It took us a while to find any White-fronted Geese today, but we did eventually.

Pink-footed Geese – out on the marshes during the day today

There were several Marsh Harriers out quartering the marshes and a Buzzard came in and landed in one of the tall trees in front of us. A juvenile Peregrine flew in towards us, carrying something it had caught in its talons. When it got to the trees, a Sparrowhawk flew up and seemed to chase after it.

Once again, we made our way on east and stopped at Warham. On the way, a Barn Owl was out quartering over a grassy field by the roadside. We parked and walked down towards the coast. The hedges either side of the track once again held quite a few Blackbirds and the odd Song Thrush. A few tits and a couple of Goldcrests working their way along ahead of us. The weedy cover strips along the edges of the fields seemed to contain a few finches and buntings – including Linnets, Reed Buntings and several Yellowhammers.

Down at the front, we stopped and scanned the saltmarshes. It didn’t take long before a Hen Harrier appeared, a ringtail (a generic term for a juvenile or adult female). It made its way west along the far edge of the saltmarsh towards East Hills. Shortly after, a second ringtail Hen Harrier appeared. There were also a few Marsh Harriers around, circling over the marshes getting ready to roost.

A small falcon appeared, then chased by a second. One of them perched up on the top of a post and we got it in the scope – a Merlin. It stayed for ages in the same place. We had seen the big flocks of waders way off in the distance, over on the beach, zooming around a couple of times – normally a sure-fire sign that a bird of prey is nearby. Eventually we found a Perergine perched out on the beach.

We had hoped to see a male Hen Harrier and finally one appeared, flying in over the short grass on the far side. It was a bit distant, but we got it in the scope – we could see it’s silvery grey body plumage and black wing tips. Pretty soon after that, we lost count of the number of Hen Harriers. It was hard to tell whether the next sighting was a new bird or one that we had already seen earlier. We certainly saw 1-2 grey males and 3-4 ringtails.

There was a good size flock of Linnets buzzing in and our of the hedge behind us while we were there. A Fieldfare flew in over our heads, possibly a new arrival. We could see Hen Harriers flying back and forth out over the saltmarsh right to the last, but eventually the light got too poor and we decided to head back. We could hear a couple of Bullfinches calling on the way.

It had been another fantastic day – Pallid Harrier was the undoubted highlight, but it was great to see so many other birds as well.