Day 2 of a long weekend of tours today and we made our way west along the North Norfolk coast this time. Yesterday’s forecast had suggested it would rain all day today, so we counted ourselves lucky that the morning was dry, if rather cold and windy.

A Barn Owl hunting beside the road was a nice surprise as we drove along the coast road first thing this morning. Before we got to Titchwell, we turned inland to explore the area around Choseley. A winter wheat field was full of Lapwings, Curlews and a sizeable flock of over 15 Stock Doves, which was nice to see. The hedges were full of Chaffinches and in amongst them we could see a few Yellowhammers.

There has been a Rough-legged Buzzard in the area on and off for over three weeks now, and yesterday it had been seen around Choseley, but we couldn’t find it there today. We also had a look in a couple of its other favoured spots, but it seemed to have chosen today to have gone hunting elsewhere. So we headed further west to Holme.

While it was dry, we headed out onto the beach. We could see lots of waders roosting on the sand, and more flew in to feed as the tide started to go out. There were several groups of Bar-tailed Godwits, asleep at first, and a couple of Grey Plover. In amongst them, we found a single Dunlin and Knot, before the godwits woke up and flew down along the beach. More waders flew in to join them, plus a couple of silvery white Sanderling and several Turnstones. 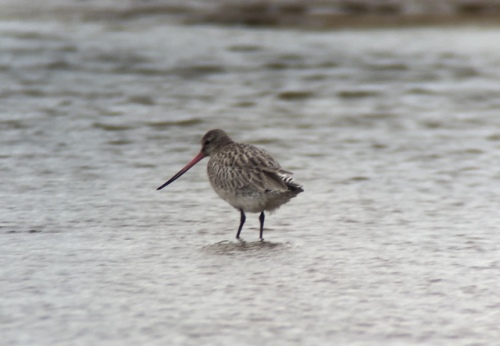 We flushed several small flocks of finches from the dunes – little groups of Linnets and a larger flock of Goldfinches, accompanied by a couple of Greenfinches. There were a few Skylarks feeding on the edge of the saltmarshes as well.

We walked further along the beach towards Gore Point. We had hoped to find some birds out on the sea. There were certainly lots of Common Scoter, but they were a long way offshore today, and impossible to see on the choppy waters until they flew. A single Red-breasted Merganser flew past. It was bracing in the fresh wind out on the beach, and noticeably colder than of late. We decided to make our way back to the car.

Holme – the view along the beach towards Gore Point

We stopped on the boardwalk to scan the grazing marshes. A couple of Marsh Harriers were quartering the fields. On the other side, we could see a small flock of Wigeon and Shoveler on the saltmarsh and three Little Egrets on the edge of one of the pools.

We made our way back east and had a quick look in at Thornham Harbour next. We climbed up onto the seawall from where we could have a good scan of the surrounding area. A large falcon circled up over the fields towards Holme, before powering off inland – a young Peregrine. A small bird hiding on the far side of the old Coal Barn turned out to be a Rock Pipit playing hide and seek beyond the ridge. Eventually it flew down onto one of the boats and was joined by a second bird – we got good views of them through binoculars, but they quickly flew down onto the other side of the harbour channel. They were rather skittish and wouldn’t linger long in any one place.

From Thornham, we swung back inland again. A large flock of Linnets came out of a weedy field beside the road. A couple of Mistle Thrushes flew overhead and landed on the wires by the road briefly, before dropping down into a freshly cut field to feed. We paused to scan the hedges regularly, in case we could find a raptor. On our way back down towards Titchwell, we finally sighted a large bird tucked into the far side of the hedge about a mile further east. Through the scope it looked palish headed, although probably not pale enough for our target, but we drove round for a closer look anyway, just in case. Sure enough it was just a palish Common Buzzard.

We made our way down to Titchwell next. A flock of Long-tailed Tits were working their way through the sallows as we approached the visitor centre. We stopped to have a look at the feeders, where a Coal Tit kept darting in, grabbing a sunflower seed, and darting back to the bushes. There were lots of finches squabbling around the feeders – Chaffinches, Greenfinches and Goldfinches – but a different finch was lurking in behind the foliage in the bushes behind. We got it in the scope – a Brambling. Whiter bellied than a Chaffinch, with an orange wash across the breast and orange shoulders, we could even see its distinctive white rump when it turned away from us. It sat looking at the other finches on the feeders for some time before eventually it decided to fly and get something to eat itself.

Brambling – hiding in the bushes behind the feeders

As we set off to walk out onto the reserve along the main path, one of the group asked whether there were any Water Rails in the ditches at the moment. Almost at the same time, another sharp-eyed member of the group spotted one scurrying along through the water below the trees. Perfect timing! We stopped to scan the grazing meadow pool but it was cold and windy out there and completely devoid of birdlife today. The skies had become progressively greyer through the morning, and now it started to drizzle with rain, so we made a quick beeline for the shelter of Island Hide.

There were lots of birds out on the freshmarsh. A good number of Teal have already arrived for the winter and carpeted the water over towards the reeds. There were also good numbers of Gadwall and Shoveler and a few Wigeon out on the islands. However the prize for the smartest of all has to go to the Pintail – there were several stunning drakes and a similar number of elegant ducks out with them today.

Teal – male and female, feeding on the mud in front of Island Hide

There was a good sized flock of Black-tailed Godwits roosting out on the water, but not so many other waders at first on the freshmarsh today. A small number of hardy Avocet continue to stick it out here – although they might have been questioning that strategy given the weather today, when most of their brethren have departed for milder climes! A couple of little groups of Dunlin were feeding around the islands.

Suddenly, two more Water Rails came racing out of the reeds in front of the hide chasing each other. They disappeared back in almost immediately but shortly afterwards came out again for another brief appearance. That was obviously enough chasing round for now, and thankfully one of the Water Rails then worked its way slowly along the edge of the reeds, letting us get good views of it in the scope.

It was still drizzling but it was only light, so we decided to try our luck further on before it got any worse and head out towards the beach. The Volunteer Marsh looked rather empty today, apart from a few Redshank and a couple of Curlew. However, a Black-tailed Godwit was feeding right by the path at the far corner, and gave us great close-up views when we got up to it.

The Tidal Pools also looked less busy than they have been recently. A few groups of Wigeon were feeding out in amongst the saltmarsh vegetation and five Little Grebes were sheltering round the edge of the tall island. There have been several Spotted Redshanks on here in recent weeks, but there was no sign of any at first today. Then a rather pale wader appeared from behind one of the islands – silvery grey above, white below, with a bold white supercilium and a longer, finer bill than its close cousin, it was a winter plumage Spotted Redshank. It waded out into the deep water and started feeding, jabbing its bill feverishly into the water. 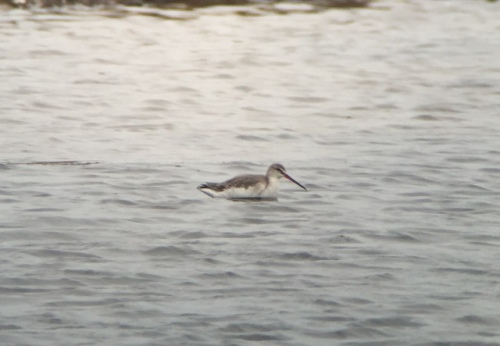 We were feeling bold, so we continued on out to the beach. The tide had gone out now and there were lots of waders out on the rocks. Mostly they were the same species we had seen earlier on the beach at Holme – Bar-tailed Godwits, Grey Plovers, Knot and Turnstone. However, in with them were two Ringed Plovers, a nice addition to the day’s list.

The wind had dropped and the sea was surprisingly calm, but there was still surprisingly little activity offshore – just as we had seen at Holme. There was not even a Gannet feeding offshore, and no sign of any ducks today. Eventually we found just two Great Crested Grebes way off in the channel towards Scolt Head. It was rather cold out on the beach so we didn’t linger too long and made our way back to the shelter of Parrinder Hide. It was a wise decision as the drizzle increased in intensity for a while after we got there.

The highlight from here was the Common Snipe. As soon as we got into the hide, we could see one feeding on the edge of the vegetation below the bank further along. It fed for a while before disappearing into cover. A little later, we picked up another Snipe feeding out on one of the recently mown islands, a bit closer than the first. Then another appeared on the waters edge just along from the hide and gave us great views. They are such smart birds, so well camouflaged when they are not out feeding.

Having not seen a Water Pipit today on the drained grazing meadow pool, which is where they have been regularly in recent weeks, we thought we might find one on the freshmarsh. A Meadow Pipit was feeding out on one of the recently mown islands with a couple of Pied Wagtails. We heard a sharp call which sounded promising, but unfortunately it was a Rock Pipit which had dropped in instead – having obviously not read the script! It was not to be today.

With the low grey cloud and drizzle, the light faded early today. Lots of gulls came in to bathe and preen before roosting. The largest number were Black-headed Gulls, with a few Common Gulls in with them. Lesser Black-backed Gulls were the most numerous of the larger species, with slightly fewer Herring Gulls. A slightly bigger gull, with a grey back in between Herring and Lesser Black-backed in shade, was an adult Yellow-legged Gull.

More waders flew in from the beach – a Knot, lots of Turnstone, and a couple of Ringed Plover. We could see several Marsh Harriers circling over the reedbed, getting ready to go into roost. Then with what little light there had been failing, we made our way back. 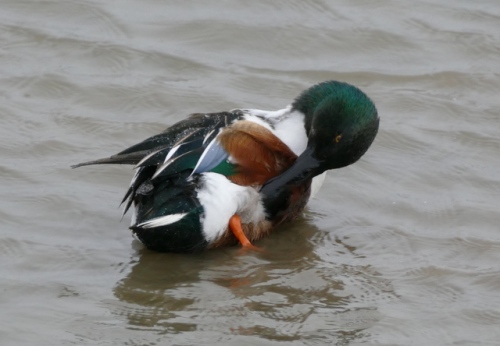