A Private Tour today. It was another lovely clear, sunny day but the strong easterly wind left a chill in the air and the smaller birds looking for cover. We wanted to look for some autumn migrants and had a particular request for some waders. We headed for Wells Woods first. There have been several Yellow-browed Warblers here in recent days, as well as some other commoner migrants, so this seemed like a good place to look.

It started well – the usual Little Grebes on the boating lake, and a couple of Chiffchaffs chasing round in the sun in the trees just beyond.  But the wind was already whistling in around the trees and the Dell was quiet. We worked our way west, checking out all the likely spots but could not find the tit flock anywhere. The highlight was several Continental Song Thrushes – greyer backed than our local birds and recently arrived for the winter – which dropped down out of the trees to feed in a hawthorn.

We came out of the trees back onto the main path and were about to start making our way back when another birder further along whistled to us. He had just seen a Yellow-browed Warbler with the tit flock on the edge of the path, but all the birds had just moved deeper into the trees. We set off after them – we found Long-tailed, Blue, Great and Coal Tits, Treecreepers, Goldcrests and even a Blackcap, but the birds had moved high up into the tops of the pines and were increasingly hard to see. We followed the flock in the hope it would double back to the edge, and we did hear the Yellow-browed Warbler calling, but the birds just went deeper and deeper into the trees. In the end we decided to give up and try something else. 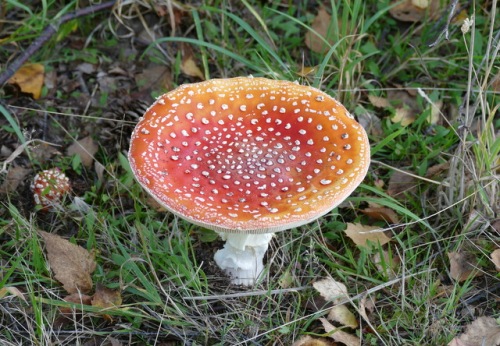 We drove west to Titchwell. All the car parks were almost full – remarkable for mid-week at the end of September. We decided to walk round via Fen Trail to Patsy’s reedbed and explore that side of the reserve before lunch. There had been three Yellow-browed Warblers reported from Meadow Trail earlier in the morning, but it was very exposed and windy out there now – and consequently rather quiet.

We turned and headed back towards Fen Trail. We could hear Long-tailed Tits approaching through the sallows, so we positioned ourselves where they would have to cross the path. The Long-tailed Tits arrived first, pausing to feed for a few seconds before moving past us, followed by a few Blue and Great Tits. Then a loud, strident ‘tsoo-eeest’ alerted us to the arrival of a Yellow-browed Warbler. It was tough to see initially, as it was feeding on the outside of the sallow above us. Eventually we picked it up, and we could see it flicking about – a small warbler, with whitish underparts, a bright, pale supercilium and double wing bar. It made up for our struggle to see one in Wells earlier. 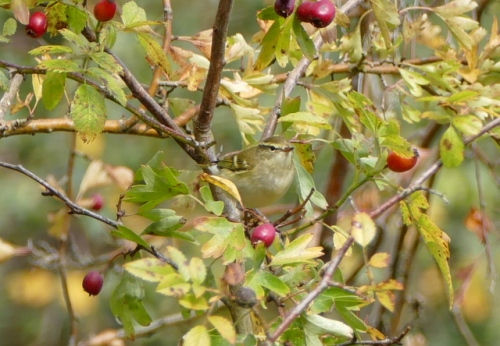 Yellow-browed Warbler – here’s one from Wells the previous day

Fen Hide was quiet as usual, so we walked on to Patsy’s Reedbed. This has been chock full of moulting ducks in recent weeks, but we were surprised to find it almost completely empty today. It turned out that reserve staff had been working on there earlier. We walked on along the East Trail to the Autumn Trail. Despite the wind, there were still quite a few dragonflies out – mostly Common Darters basking in the shelter of the vegetation on the path. 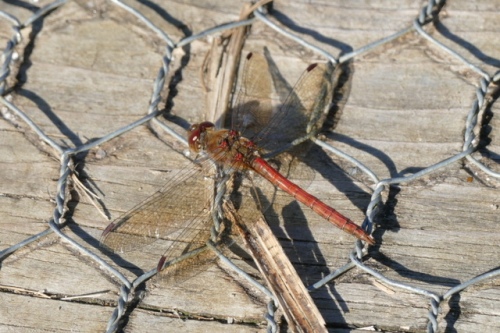 Common Darter – basking on the boardwalk

At the corner of the Autumn Trail we climbed up onto the bank where the new extension path leads off. Out on the saltmarsh towards Brancaster we could see several white shapes – four Spoonbills were doing what they like to do most, sleeping! One at least woke up long enough to flash its bill, showing off the yellow tip of an adult, before dozing off again. Nearby, on the saltmarsh, were a couple of Little Egrets and Grey Herons, also standing around lazily. 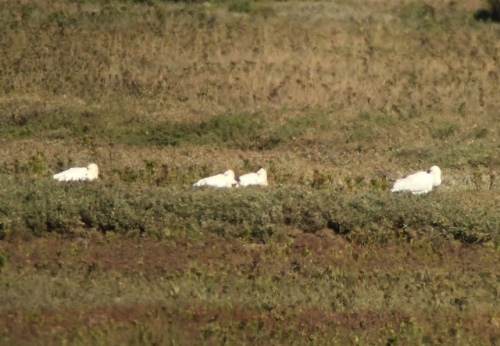 Round at the back of the freshmarsh, at the end of the Autumn Trail, we could see a largish flock of waders roosting. They were mostly Black-tailed Godwits but in amongst them we could see a couple of Ruff and a little huddle of five Spotted Redshanks. They too were mostly asleep, but woke up occasionally to flash their bills, longer than a Common Redshank’s and with a needle-fine tip. 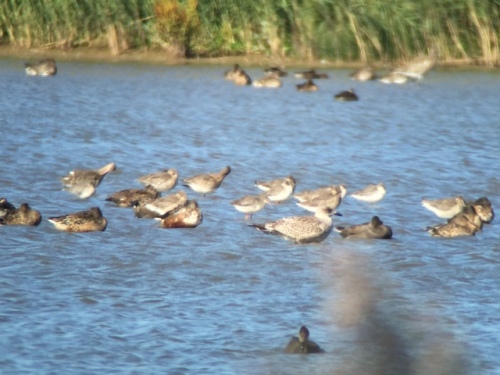 There were also lots of duck on the freshmarsh – the numbers continue to grow, as more arrive for the winter. There were lots of Wigeon, Shoveler and Teal, mostly still in dull eclipse plumage but the odd one of the latter in particular is notably now showing more of a breeding head pattern and some grey body feathers. A single eclipse drake Pintail was asleep but we could see a patch of new grey body feathers on its flank. In contrast, the drake Gadwall and Mallard were almost in full breeding plumage already.

It was getting on for lunchtime, so we headed back to the car. The aim was to spend the afternoon out on the main part of the reserve. The feeders by the visitor centre were rather deserted. After a well deserved break, we walked back out and just stuck our heads round the corner to double check that there were still no birds there. The feeders were empty and at first we could only see a single Chaffinch, but then we noticed the Brambling lurking in the bushes just behind, the first we have seen this autumn. It perched up nicely so we could get a really good look at it in the scope. 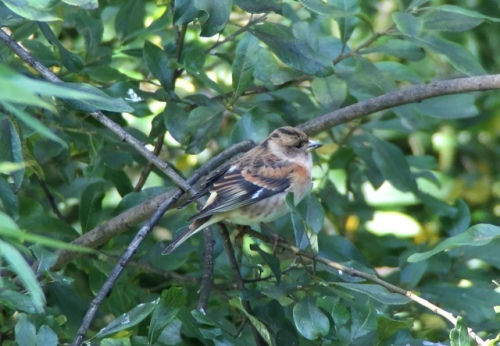 Brambling – the first we have seen this autumn

It was very windy out on the main path. The grazing marsh pool was still mostly dry and empty (apart from the cows!) and there was nothing on the reedbed pool but a raft of Common Pochard with a couple of Tufted Duck today. So we made straight for the Island Hide and some shelter.

There had been a Temminck’s Stint reported earlier on the freshmarsh. When we arrived in the hide, it had supposedly just walked round the corner of the furthest island, although all we could see emerge on the mud there was a Dunlin. Apart from lots of Lapwing and Golden Plover, there weren’t many waders round this side of the freshmarsh today – we had seen more from the Autumn Trail. There were only a few Avocet, a handful of Dunlin and a few Ruff.

A couple of Brent Geese flew in and landed on the freshmarsh. Shortly afterwards, a bigger group of about 40 arrived and joined them, for a wash and brush up. The Brent Geese are now in the process of returning from Russia for the winter. Out on the beach a little later, we saw a line of five Brent Geese flying in over the sea – new arrivals. 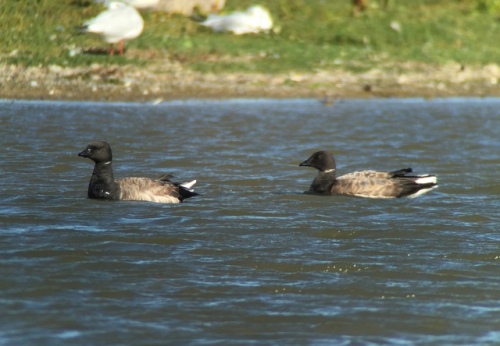 Brent Geese – several dropped into the freshmarsh to bathe

Our next destination was Parrinder Hide, but first we had to brave a windy walk along the bank. We stopped to look at a couple of Dunlin on one of the islands. They were both juveniles, with black spotted bellies, but one had started to moult and had a lot of grey feathers in its upperparts whereas the other had not. Two Ruff on the next island were both winter adults but had rather different coloured legs – one was rather yellow but the other was a rich deep orange. A smart Snipe was probing around nervously amongst the vegetation nearby. Most of the Snipe have been on Patsy’s recently, but perhaps this one had been forced over onto the freshmarsh by the disturbance this morning. 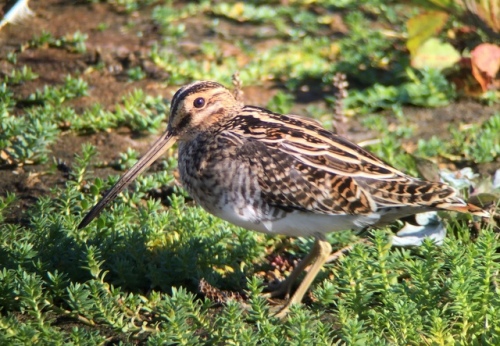 Snipe – on one of the islands from the main path

Round at Parrinder Hide, there was not much different to see on the freshmarsh. We had hoped to be able to see the reported Temminck’s Stint from here, but there was still no sign of it. We had a good scan but didn’t stay too long.

It was more productive on the other side of the hide, overlooking the Volunteer Marsh. At first it seemed a little quiet, apart from the usual scattering of Redshank, Curlew and Grey Plover. As we looked more carefully, we started to find a few bits and pieces. A single Bar-tailed Godwit appeared just long enough for us to get the scope on it, before flying off back towards the beach. A couple of Ringed Plovers appeared next to one of the Grey Plovers.

Suddenly a different wader dropped in with the Redshank. It was a little bigger than a Dunlin, longer-winged and more streamlined, with a fairly long decurved bill. We got it in the scope and could see that it was a juvenile Curlew Sandpiper – one of the species we had wanted to see today. We got a great look at it feeding out on the open mud for about 5 minutes before it looked round nervously and flew off. 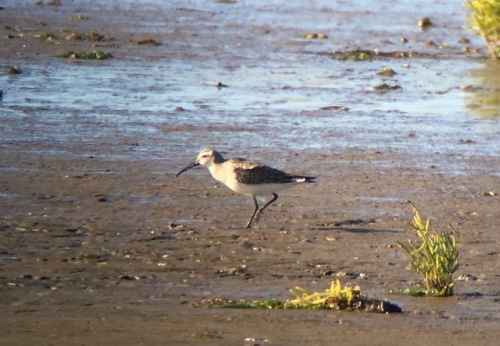 Curlew Sandpiper – this juvenile landed on the Volunteer Marsh briefly

We walked on towards the beach. The tidal pools were much quieter than recent weeks today, probably a combination of the current very high tides, the wind and the fact that it was low tide today so a lot of birds were feeding out on the beach. From out on the sand we scanned the shore – we could see a few Knot and Turnstone, lots of Oystercatcher and a silvery white Sanderling. A Greenshank flew past and dropped down among the rocks out of view.

Apart from the kite-surfers, the sea was quiet. A Great Crested Grebe was diving and impossible to get onto. It was also just a bit too windy to be standing out here today, so we turned and headed back the way we had just come. A stunning Grey Plover performed for the crowd as we passed. 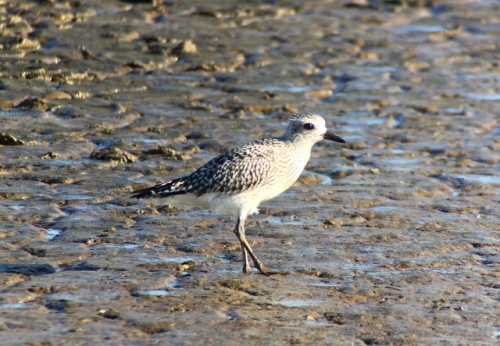 Grey Plover – feeding on the Volunteer Marsh on our way back

We made a beeline for the Island Hide again to see if we could see the elusive stint that we had missed earlier. One of the occupants put us on to a couple of birds which he thought were stints, but once again they turned out to be Dunlin. They can be very confusing, as they moult and lose their belly markings.

Thankfully one of the other birders in the hide pointed us to a real stint out on the furthest island. However, it was not a Temminck’s Stint but appeared instead to be a Little Stint. It was a slightly odd looking bird – lacking the features we could expect to see on a classic juvenile at this time of year, the pale fringes to the upperparts feathers, the white mantle lines. Most likely either a very worn adult or dull moulting juvenile. Unfortunately it was a little too far away to see any fine details clearly. Still, it was an interesting bird to see and one of the hoped-for species, even though we had not really expected to see one. A bit of a bonus to end the day.