A half day tour today, in the Wells and Holkham area this afternoon. It was gloriously sunny again – cool in the East wind coming in off the sea, but lovely out of it.

We met up in Wells and headed down to the harbour first, to the gull colony. There was lots of activity, as usual, and the Black-headed Gulls were making lots of noise. There were plenty of fluffy brown juveniles already. Those that wandered away from their nest site or down onto the beach were aggressively pecked at by the other neighbouring adults. With the odd Great Black-backed Gull hanging around as well, it is a perilous existence for a young gull away from the nest. A pair of Common Gulls down on the edge of the beach were particularly smart – we admired their pure white, rounded heads, dark eye and yellow bills.

We heard the Mediterranean Gulls first, their calls are very distinctive and could be heard quite clearly even over all the background noise. Then we picked out a pair of adults wheeling in the melee above the colony. We watched them flying back and forth, flashing their white wingtips. Even better, they then landed on the beach below us. We got them in the scope and could see their jet black hoods (unlike the inappropriately named, chocolate-brown headed Black-headed Gulls!). Very smart birds. 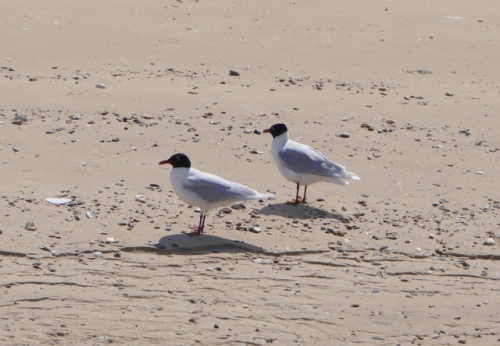 There were lots of terns to look at too. On the edge of the gull colony, several Common Terns were sitting on the shingle. We got them in the scope and noted their bright orange-red bills with a distinctive black-tip. Eventually. we managed to find a single Arctic Tern as well – its slightly shorter, darker, blood red bill gave it away, as did its longer tail streamers which stuck out noticeably beyond the tips of its wings. The Little Terns were all feeding over the channel, plunge diving. One in particular came very close in front of us and we could see its yellow bill and white forehead patch, which help to distinguish them from the others. Their small size also gives them away, and this was most obvious when a Common Tern joined them fishing.

With the tide on its way in, we could see lots of waders being pushed up the mudflats on the opposite side. There were lots of Oystercatcher, but also a few smaller waders. A flock of 7 Knot was notable, in all grey winter plumage, and a couple of Turnstone. A single Curlew was also probing around in the muddy channels higher up the beach.

Our next stop was at Holkham. Despite the warmth of the afternoon, there were still a few warblers singing. A Blackcap sang from the shade of the trees by the end of Lady Anne’s Drive. There were several Chiffchaffs and Whitethroats still in full voice, and a single Willow Warbler in the edge of the pines. From out in the reeds by Washington Hide, we could hear both Sedge and Reed Warblers, but they were not so easy to see.

The usual tits were also present. We came across a nice family of Long-tailed Tits which dropped out of the pines to feed in a Sycamore, with lots of sooty-faced juevniles. While we were watching them, a Treecreeper appeared in the same tree and worked its way up and out along the branches. We could also hear several Goldcrests singing. The local Jays can be a bit elusive sometimes in the warmth of an afternoon, but we saw several today. Often, the alarm calling of the tits and warblers gave away their presence – there should be lots of nests for them to raid at this time of year. 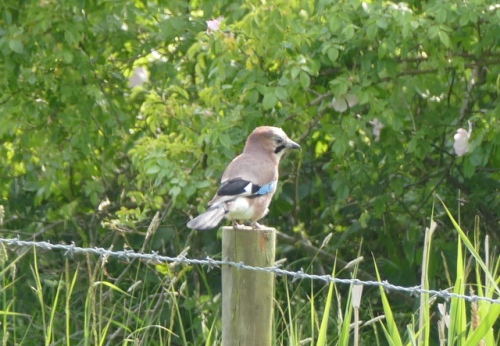 Jay – very active today, even in the heat of the afternoon

As soon as we arrived at the Joe Jordan Hide, we could see a collection of white shapes on the bank of the nursery pool – Spoonbills. They were mostly asleep – sleeping is what Spoonbills do best! There were 5 dazzling white juveniles, not fully grown yet and so slightly smaller still than the more dirty-coloured adults. Another juvenile was more obliging, practising its feeding action out in the middle of the pool, and we could see its short, teaspoon-shaped bill. As we sat in the hide, there was plenty of coming and going, with Spoonbills moving backwards and forwards between the trees and the pool. An adult returning from a feeding foray was instantly set upon by its young, pursuing it, bouncing up and down, until it got fed. 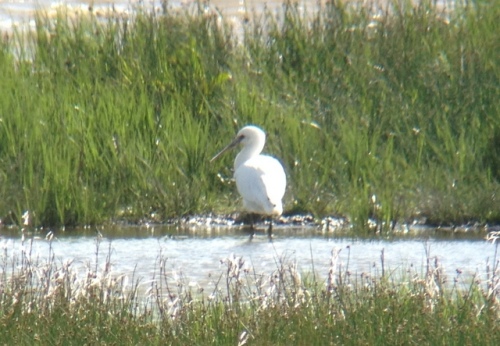 There were other birds coming and going as well – Little Egrets and Cormorants back and forth to the colony, bringing food for hungry beaks. There were still several Grey Herons around as well. Down on the pools, there were several Avocets feeding and flocks of Black-tailed Godwit which flushed periodically and whirled round flashing their black and white wings and tails. A Kingfisher was flushed by a Marsh Harrier from out of a ditch, but disappeared too quickly for everyone to get on it – a wise move, given that the Marsh Harrier took a swoop at it as it did so!

There are always lots of geese at Holkham, at this time of year mostly Greylags and Egyptian Geese. However, a scan of the grazing marshes revealed a couple of Pink-footed Geese still as well. There are often tens of thousands here during the winter, but almost all of them leave for Iceland in the late winter or early spring. Only a few remain through the summer, often sick or injured birds. We could see their distinctive dark heads and small, dark bills compared to the Greylags.

Holkham is also a great place to watch Marsh Harriers. We could see a pretty constant stream of birds flying back and forth from the Joe Jordan hide, but we stopped in a Washington Hide on our way back. We were glad we did – a particularly fine male Marsh Harrier passed right in front of the hide, and proceeded to spend several minutes wheeling over the reeds and back and forth over the grazing marsh just to the east. We saw a good selection of other regular raptors as well – a distant Red Kite or two over Holkham Park, Common Buzzard, Sparrowhawk and Kestrel.

Also from the hide, we watched a family of young Swallows in the dead trees below. A Cetti’s Warbler sang loudly from the bushes on the edge of the reeds. And a line of five Spoonbills flew out east over the grazing marshes, presumably heading to the saltmarsh to feed. Then it was time to head back.