Day 3 of a long weekend of tours today, the last day. We would focus on the eastern end of the North Norfolk coast today, between Kelling and Stiffkey. It had actually rained overnight, the first rain for some time, and the day dawned overcast and cool, but it cleared up through the day and was sunny and warm (out of the wind) by the close.

We started at Friary Hills. This can at times be a very good spot for migrants, but the bushes were quiet today. From the top, we scanned over Blakeney Freshes, picking up a variety of wildfowl for the day. As we walked back, we did hear a Reed Warbler singing from the bushes and a Lesser Whitethroat, which eventually showed well.

It was our intention to head round to Kelling, but news of several Blue-headed Wagtails in the Eye Field at Cley saw us take a small diversion on the way. Blue-headed Wagtail is the main central European subspecies, the equivalent of the British Yellow Wagtail, and they form just two of many subspecies of a very widely distributed and very variable species. Several subspecies occur or are suspected to occur in the UK from time to time, but as we were to see today, the subject is even more complicated than that!

It took us a while to find the wagtails, as they were mobile and distant at first. We contented ourselves with looking at several Wheatears intially. Finally we picked up a couple of Yellow Wagtails and a smart male Blue-headed Wagtail dropped in with them. So far, so simple!

Blue-headed Wagtail – a smart male in the Eye Field

In the end, we saw at least 8 ‘yellow’ or flava wagtails, the all-encompassing moniker for the species (Motacilla flava is the Latin name for the species as a whole). There were several male Yellows, as well as at least one male Blue-headed, and a number of females of different hues (it is still not clear where the appearance of female Yellow stops and female Blue-headed starts!).

At one point, the little group of flava wagtails landed with four ‘monochrome’ alba wagtails. In a similar way to the Yellow Wagtail, the British Pied Wagtail is replaced on the continent with the grey-backed White Wagtail (two subspecies of the very widely distributed Motacilla alba – a theme is emerging!). We could see that the group of four in the Eye Field included two smart silvery-grey backed White Wagtails as well as two Pied Wagtails. A great start – four subspecies of Wagtail together!

Round at Kelling, we set off along the track to the beach. A Goldcrest sang from the trees by the school and a couple of Common Whitethroat sang from the hedges. The cows were feeding up by the gate, but there were no wagtails with them as we arrived. However, as we walked further on, we could see two flava wagtails on the short grass by the pool. One was a smart male Yellow Wagtail, but whilst the other resembled a Blue-headed Wagtail, it looked a little pale around the head. Unfortunately they were flushed by a couple of people walking along the track before we could get the scope on them.

We could still hear the odd Yellow Wagtail calling from time to time, but we couldn’t see them at first, until we realised they had flown into the dense clumps of rushes. It was only when the cows started to walk back down the water meadow towards the pool that the wagtails came out. Then we realised there were flava wagtails everywhere – at least 12-15 birds!

At first, we contented ourselves wit watching the bright yellow British Yellow Wagtails. We admired the way they ran in and out of the cows feet and even seemed to get so close to them feeding that it would not have been a surprise to see one get eaten! They looked stunning in amongst the daisies and dandelions in the short grass.

Yellow Wagtail – careful, not too close!

There were a couple of nice smart male Blue-headed Wagtails in amongst them as well – nice contrasting blue-grey heads with a strongly marked white supercilium. Then the paler-headed male appeared – unlike the regular Blue-headed males, this one appeared to have a pale silvery grey crown, a ‘Channel’ Wagtail.

Blue-headed and Yellow Wagtails are known to ‘hybridise’ in northern France, and the resulting intergrades are known as ‘Channel’ Wagtails. These show much paler heads than Blue-headed – silvery-grey, powder-blue or even approaching white. They turn up quite regularly with our Yellow Wagtails in the spring.

As if that wasn’t already complicated enough, then another darker headed bird appeared. We glimpsed it a couple of times and it looked really quite striking. At first, it appeared to have an all dark grey head – dark slate grey on the crown and blacker on the ear coverts. However, when we got a good look at it, we could see that it had a very thin supercilium. It also had a rather white upper throat. 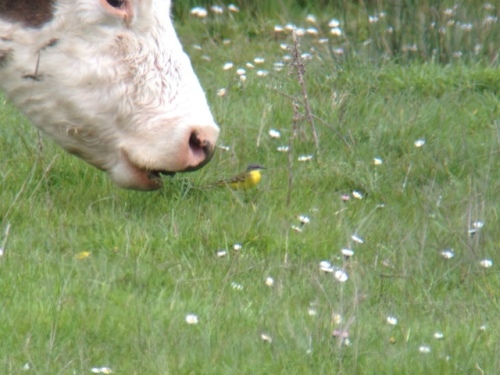 flava Wagtail ssp – most likely an intergrade of some form

This bird did not obviously fit any of the regular subspecies or intergrades. Perhaps it was a mixture of Blue-headed and the Italian subspecies, Ashy-headed? We will never know, but it was an interesting bird to see nonetheless. The morning as a whole was a great opportunity to study a variety of different wagtail forms. We spent time discussing the different subspecies and known intergrades between them. At the end of the day, it was just great to watch them all running amongst the cows and spring flowers. Still, after all that we needed a sit down and some lunch!

As we walked back up the track, three young Field Voles were trying to hide in the middle of the path – presumably a dog had dug them out of their nest. We tried to usher them to the safety of the verge, but they kept running back out into the middle.

After lunch, we went for a walk at Salthouse. We eventually found the single Snow Bunting feeding in the field about half way towards Gramborough. The flock of Snow Buntings which roamed the beach through the winter appears to have long departed, but this single bird remains. Still, it seemed perfectly happy feeding quietly on its own, until something upset the local Sand Martins and they flew round calling – and the Snow Bunting joined them.

Snow Bunting – the rest of the winter birds have departed

There were also several Wheatears in the field. As with the birds we saw yesterday at Burnham Overy, the males at Salthouse were washed with orange underneath, especially on the throat and upper breast, to varying degrees of intensity – Greenland Wheatears.

We finished the day at Stiffkey Fen. As we crossed the road, a Willow Warbler was singing in the sallows by the river. We stopped to try to see it and a Reed Warbler was lumbering around in the same tree. A Cetti’s Warbler sang loudly nearby, and we could hear the scratchy notes of a Sedge Warbler from the Fen. A hooting Tawny Owl was more of a surprise, in the middle of the afternoon.

Scanning the Fen from the path, we could see a selection of waders. A Little Ringed Plover lurked on one of the islands. Several Black-tailed Godwits stood in the water. A smart male Ruff was hiding in the vegetation on the shore and a Common Snipe eventually showed itself, preening nearby.

From up on the seawall, we could get a better look over the Fen. At first we couldn’t see anything we hadn’t seen from the path. Finally, we picked up a Common Sandpiper working its way round the water’s edge at the very back. On the saltmarsh side, a Greenshank was working its way up the creek and quickly disappeared from view. Thankfully, a few moments later, it flew back out and onto the Fen where it proceeded to bathe and preen. There were also several Avocet in the channel by the seawall.

Avocet – a couple of pairs were in the tidal channel at Stiffkey, more on the Fen

As we walked round towards Blakeney Harbour, we could hear a Whimbrel calling. It then flew in and landed on the edge of the creek opposite us. Eventually, once it came round out of the sun, we could see its pale central crown stripe. It then flew out into the creeks in the harbour.

Whimbrel – feeding on the edge of the harbour

As we came round the corner, we could see a couple of Common Buzzards soaring up over the fields just behind us and a Red Kite was circling lazily over the saltmarsh. There were still plenty of Brent Geese out in the harbour and we could see lots of gulls and Sandwich Terns out toward Blakeney Point. As we turned to walk back, a pair of adult Mediterranean Gulls flew over us calling.

From back on the seawall, the Common Sandpiper was on the edge of the mud on the tidal channel. But it was very jumpy and flew off as we approached, flicking down the channel on bowed wings. A Redshank flew up from the Fen and over the seawall, displaying over our heads – fluttering its wings fast, again holding them deeply bowed, then gliding for a second, before another burst of quick fluttering, before it glided down across the channel and landed on a post. Stunning to watch. As we walked back, we stopped to admire a cracking male Lapwing feeding quietly in the set-aside field amongst the flowers. A lovely end to the day.