Day 2 of a long weekend of tours – Saturday down in the Brecks today. The weather forecast was far from great – cloudy, showers and turning windy – but we dodged the rain and made the most of the drier weather. And we saw all the Brecks specialities we went looking for today.

We started at Lynford Arboretum. The overnight rain had stopped but it was cold and damp. Despite this, before we left the car park we heard our first Firecrest singing. It was in the tops of the fir trees, but flicked out into the deciduous trees in front. We could see it flitting around but it was high up above us, so we couldn’t see its head pattern. We noted its rather whitish underparts, noticeably paler than the resident Goldcrests nearby.

We walked up to the gate. There were lots of Chaffinches down amongst the leaves. A female Siskin came down to drink as we stood and watched. Then a female Brambling appeared – much more orange than the Chaffinches. There was also a steady stream of tits coming down to the feeders. But no sign of any Hawfinches.

We had just decided to walk on round the arboretum and hadn’t got much further when we heard another Firecrest singing from the trees. We stopped to listen to it, and could also hear the distinctive electric ‘ticking’ call of a Hawfinch nearby. A quick look round amongst the tops of the trees and we picked up the distinctive shape of a female Hawfinch tucked into the highest point of one of them. We got her in the scope and everyone got a quick look before she flew off into the Arboretum.

We turned back to the Firecrest, and tracked it down to where it was singing. Then we heard the Hawfinch again. It was heard to know which way to look. We searched for the Hawfinch, but couldn’t find it. This Firecrest was high up in the fir trees as well, and although we could hear it we could only see it flying between the trees. Frustrating.

We decided to walk on. There were lots of other birds in the Arboretum. Lots of tits – including a nice Marsh Tit which perched up for us nearby. Nuthatches were calling from the trees, a Song Thrush was singing and Siskins buzzed overhead.

We wandered round among the trees and could hear more ‘ticking’ Hawfinches up high in the tops. As we rounded a corner, we just saw them as they flew off, catching the distinctive broad wings, heavy front-ended body, and short tail. We counted them as they flew – six in total – but they disappeared out of view, in the direction of Lynford Hall.

Back round towards the gate, and the Firecrest in the Arboretum was still singing. We stopped again, and followed it for a while. Eventually it came lower, briefly dropping into a smaller bush in front of us, flashing its black and white face stripes, before darting off again into cover.

Watching from the gate, a Nuthatch clambered up and down the tree trunks. There were lots of Chaffinches still amongst the leaves and a smart male Brambling dropped down to join them – much brighter orange than the female we had seen earlier, on both breast and shoulders. It’s head feathers were still well-fringed with brown, but more black was starting to show through now.

But there were still no Hawfinches down feeding among the leaves. However, we had not been there long when we heard calling from the trees behind. Unusually, we still couldn’t see them there until they flew across to the Arboretum. Then there they were – a pair of Hawfinches. This time they perched up nicely in the top of a bare deciduous tree, the male above singing and the female half hidden below. This time we got a really good look at them. 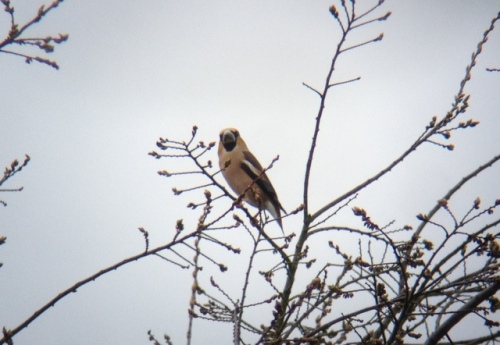 The weather was not at all conducive to seeing Goshawks, but it was a particular target for some of the group today, so we decided to give it a go. We drove deeper into the forest and set out walking along one of the rides. At the back of a small open area half way down, a shape appeared briefly above the trees. A young Goshawk. Unfortunately, it dropped back down again as quickly as it had appeared and the rest of the group didn’t have time to get on it. And then it didn’t reappear. A double blow.

We carried on to a large clearing and scanned across the tops of the trees from there. The wind was gusting and it was cloudy and cool. A couple of Common Buzzards appeared and flew low across the clearing. A Kestrel battled across into the wind. But that was it, raptor-wise.

At least the Woodlarks were performing. A pair was flying round as we walked into the clearing, the male circled higher and started singing, before they both landed on the ground. We walked round and found one of them feeding quietly on a grass verge beside the track. We got great views of it in the scope – the rusty cheeks and striking pale supercilium. 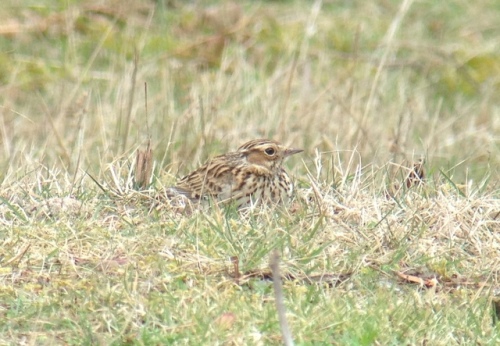 Woodlark – feeding quietly along one of the more sheltered rides

We watched the Woodlarks fly round several times whilst we were there, calling and singing. A Skylark flew up from the clearing as well – good to contrast it with the Woodlarks, both in flight silhouette and song. A Mistle Thrush was feeding out amongst the tree stumps too.

The clouds were getting blacker and we headed for the car. Thankfully, we had just got back before it started to rain. We decided to drive over to Lakenheath Fen, where we stopped for an early lunch and sat out the worst of it. Then we walked up to the Washland viewpoint. There was no sign of the Great White Egret today, just a couple of Little Egrets. The recent rain seems to have raised the water levels again on Hockwold Washes and there were fewer egrets and waders than recent weeks. A couple of Redshank lurked at the back, with a Lapwing. A pair of Oysterctacher flew round calling loudly.

There was still a good selection of wildfowl on view – a Shelduck, lots of Gadwall, Mallard and Shoveler, several Tufted Duck and a single drake Pochard. But most of the Teal were huddled round the edges, in the reeds, trying to get out of the increasingly blustery wind and there was no sign of the Garganey. The pair of Whooper Swans was still on one of the pools with several Mute Swans. A Marsh Harrier flew over towards the reserve. A streak of bright blue was a Kingfisher flying over the water and downstream along the river. A Cetti’s Warbler sang loudly. But it wasn’t particularly pleasant standing up on the river bank, so we decided to head back to the forest.

After a short drive, we parked up and walked down one of the rides. The Great Grey Shrike was in its usual clearing, perched up high on a dead tree stump. It was quite close today and we got a really good look at it through the scope. It dropped down a few times into the grass, coming up with a Bumble Bee at one point, which it proceeded to devour. It gradually worked its way further out across the clearing, so we left it to it. A little further on, a smart pair of Stonechat sat up similarly on the tops of the dead stumps.

It seemed just a little brighter, if very windy, so we decided to have another try for Goshawk. We headed over to another site. It didn’t seem particularly promising, but we had a scan over the trees. A Common Buzzard circled but barely broke above the tops of the trees. Several Carrion Crows at least drew our attention, but the search seemed futile. Then it appeared. A hawk, heavily built, obviously powerful, with deep wingbeats, it flew low over above the trees. A Goshawk. It was at least as big as the Crows, we had them in view together, so probably a young male (in its 2nd cal year, so born in 2014).

We watched the Goshawk for a minute or so as it passed by, before it disappeared behind some taller trees. A short while later, it reappeared again and worked its way back in the direction it had come. Great stuff – especially under the circumstances. We were planning to call it a day when another scan revealed a rather different raptor flying in the other direction. The sharply pointed wings contrasted markedly with the more rounded ones of the Goshawk, so it was clearly a falcon, but obviously a big one too – a Peregrine. Not a common bird in the Brecks, probably rarer than the Goshawk here!

There was time for one more stop, so we headed back via Santon Downham and stopped at the church. It was a bit of a gamble, because the wind was blowing so hard, but a walk through the trees and we could hear a Firecrest calling towards the road. We walked out of the trees – stopping to admire a Marsh Tit in the hedge – and back round via the road. A pair of Firecrests flitted out briefly into the outer branches of one of the trees, before ducking quickly back into the ivy.

Then the rain started again and it was time to call it a day. But we had managed a very good haul of Brecks specialities for the day, particularly under the circumstances.