As we get into February and March, that is the time of year when attention starts to turn to the Brecks. Thetford Forest is the largest area of lowland pine forest in Britain, and is surrounded by remnants of once extensive heathland. At this time of year, the forest birds are displaying and are at their most visible and the heathland birds are starting to return to their territories. This was mainly a day to catch up with a friend, but the Brecks seemed like a convenient place to meet and check on a few of the local specialities in the process.

The first stop was at Santon Downham. It was a glorious frosty morning in the river valley, with crisp sunshine quickly burning through any mist, much better than forecast. We walked round the low lying area between the river and railway but there was no sign of the Great Grey Shrike which has been here for the last few weeks and unfortunately someone was standing right next to its favoured area of trees and bushes.

However, in the early sun, the woodpeckers were drumming – we could hear a couple of Great Spotted Woodpeckers from where we were walking. We had not intended to spend time looking for Lesser Spotted Woodpeckers today, but encouraged by the activity we set off to one of their traditional favoured areas. A couple of Green Woodpeckers were yaffling and one flew across the river. A Kingfisher flashed through and headed off downstream. The trees were alive with Siskin and Redwings and Nuthatches and tits were singing. After a gentle start to the day and the time spent looking for the shrike, we didn’t really have the time to dedicate to the area and a proper search, and we didn’t get to the best area for the woodpeckers, but it was magical there anyway.

We headed back to the car and drove off to another area of the Forest. It was still a bit cold, but a Red Kite circled up from behind us. There were several Common Buzzards constantly in the air and even a bit of display from two of them as they dropped into the trees. A big female Sparrowhawk displaying with exaggerated wingbeats and undertail coverts fluffed attempted an impression of our target. It even broke into a period of diving and swooping display, suggesting that spring may not be far away.

The Woodlarks have also started to sing already. We picked up one distantly over the edge of the trees, its distinctive short-tailed structure being obvious even from a distance, and we could even just catch a little burst of its song on the breeze. Several Skylarks were also up singing for comparison. We caught further bursts of song, closer up in the sky, as we stood talking and eventually one obliged us and came right overhead singing, dropping down towards the field behind us.

Unfortunately, the weather started to turn as we stood there and cloud rolled in from the west, as forecast but we could not complain given the better than expected early morning. The raptor activity dropped appreciably and we were just about to give up when another hawk appeared from the trees. This one was larger, much larger – a Goshawk. A group of Rooks circling overhead attempted a couple of swoops at it, but kept a respectful distance – compared to the Goshawk, they were noticeably much smaller, a useful size comparison which is not always apparent on a lone bird in the sky. It was a young bird, in its second calendar year (so raised in 2014), with brown upperparts and dull streaked underparts compared to an adult. It kept low and we watched it fly away through the tops of the trees with the Rooks circling above.

We headed on to Lynford Arboretum. The car park was unusually full for a winter weekday, but it quickly became apparent why. The Hawfinches have been feeding here in recent days and a large gaggle of photographers were clustered round the feeding area. The birds weren’t coming down to the ground but two were sat up in the trees and we had a really good view of them through the scope. 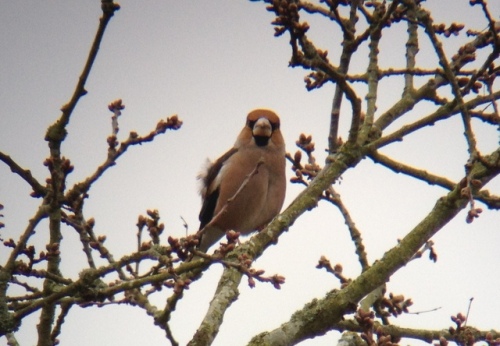 Hawfinch – up to 8 showed well in the trees today

We left the crowd behind and went for a walk around the arboretum. A mass of Siskins were feeding in the alders around the lake, to the soundtrack of constant twittering. A flock of Chaffinches flushed from the ground flew up into the trees where we picked up a female Brambling on the edge. We stopped to watch a couple of Marsh Tits coming down to the seed which had been put out by the bridge, as well as a Nuthatch and lots of Blue and Great Tits.

We ran out of time and headed back to the car. The photographers were still clustered by the gate, but they seemed oblivious to the fact that there were several Hawfinches calling in the tops of the trees. We could see two, but when they took to the air and flew off we counted four. However, there were still more Hawfinches calling from further over in the trees – it was hard to count them amongst the branches but there appeared to be at least four here too. As we left, the original group flew back into the trees by the gate, calling. Not bad – probably 8 Hawfinches and possibly even more. 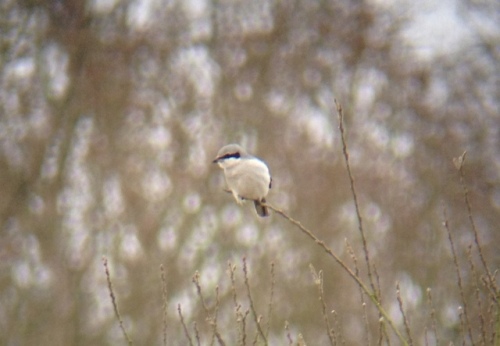 We parted company, but I couldn’t resist another look for the Great Grey Shrike at Santon Downham. It was back where it should have been in the trees. I watched it for some time, perched up on a high vantage point, repeatedly dropping down to the grass, although unsuccessfully as it returned to a high branch again empty-handed each time. With the weather now cold and cloudy, I decided to call it a day too.

Brecks Tours will run through February, March and early April. More details can be found on the website here. If you would like to come to the Brecks to look for Goshawks, Hawfinches and Lesser Spotted Woodpeckers, as well as Woodlarks, Stone Curlews and Firecrests, and even perhaps the Great Grey Shrike if it stays long enough, please get in touch.