The first tour of the New Year and the first Owl Tour of the winter today. It did not feel like a promising start with rain from the off – never ideal weather for owls. However, the forecast suggested the rain might pass through by late afternoon and, not to be put off, we set off to have a go.

Little Owls tend to like sunny days or warmth in the air, and will often sit out in the sun even in the depths of winter. Cold and rain did not seem like a likely combination to tempt one out. Arriving at the first Little Owl site and a quick scan revealed no sign. Still, we set up the scope and set about looking for other birds. Several flocks of geese were flighting from the coast, heading inland to feed; a large flock of Curlew was feeding in a stubble field; a Fieldfare flew up into the trees and a Great Spotted Woodpecker passed overhead.

Keeping one eye on the farm buildings in front of us, suddenly a shape appeared within the roof – a Little Owl! Unfortunately it was very brief and only one member of the group managed to see it before it disappeared back inside. However, we now felt a lot more confident and after a short wait (spent watching a Stoat running around among the buildings!), the Little Owl appeared again and this time sat still long enough for everyone to see it. A great start, with one species of owl under our belt already.

From there we meandered through the countryside inland from the coast, trying a number of different sites for owls, with no more success – it was just a bit too cold and wet. However, we did come across a beautiful pair of Red Kites, which flew out from a tree by the road as we passed. We stopped to watch them as they circled over the field and landed in another tree a safe distance away, from where we could get great views of them through the ‘scope. While we were standing there, several lines of Golden Plover flew overhead and inland and a Mistle Thrush perched up the hedge. We also came across a very good number of Kestrels on our travels – a good sign, possibly reflecting a productive breeding season last year.

With the rain now redoubling its efforts to put us off, we headed down to Titchwell to seek shelter in the hides (and a hot drink in the cafe!), during the quieter owl time in the middle of the day.The water levels on the freshmarsh have been raised for management purposes, which means that most of the islands are now under water. The Brent Geese were enjoying it, as well as a large number of Pochard and a few Tufted Duck. A few ducks and small group of Avocets were clustered onto the few remaining small islands. A Water Rail and several Bearded Tits called from the reedbed, but did not feel like showing themselves.

Despite the high water levels, we still managed to see a very healthy selection of wildfowl and waders. Ducks included Wigeon, Teal, Mallard, Shoveler and Shelduck. The Volunteer Marsh was alive with waders, including more Avocets, Grey Plover,  Lapwing, Knot, Dunlin, Black-tailed Godwit, Redshank and Turnstone. Out on the beach we added Bar-tailed Godwit, Ringed Plover and Oystercatcher to that list. The sea was fairly quiet, though a nice raft of Red-breasted Mergansers was out on the water. However the highlight came on the way out, when a commotion at the tidal pools saw ducks and waders scatter in all directions as a young Peregrine appeared and proceeded to stoop repeatedly and distinctly ineffectually into the melee! It also flushed the mixed flock of Twite, Linnet and Goldfinch which had been on the beach and which flew overhead.

After lunch, a hot drink and an attempt at drying ourselves out, it appeared that the rain might be easing – as had been forecast earlier on. The aim of the day was to find owls, so we set off in search of them again, in the hope that an end to the wet weather might tempt them out. A short drive back to Burnham Overy and we set off across the grazing marshes.

On the way out, we stopped to look at a couple of male Bullfinches which flew ahead of us along the hedgerow – such stunning birds, and well worthy of a proper look as they eventually perched up and allowed us to get the scope on them. We also disturbed a little covey of four Grey Partridges which stayed long enough for us to get great views, as they moved quietly away from us through the grass.

White-fronted Goose – three were by the track at Burnham Overy

The fields either side of the track held an excellent selection of geese. As well as the large flocks of Pink-footed Geese out on the grazing marsh, a small flock of Greylag right by the path contained an additional small number of Pinkfeet which gave us a chance to see their pink legs and bill detail up close. In the same field, slightly further out, were three European White-fronted Geese, the white forehead blaze of the two adults being much more obvious than that on their accompanying youngster. A small group of Brent Geese and a few Canada Geese made up the numbers. There were also lots of waders – several hundred Golden Plover, plus a good selection of Lapwing, Curlew, Dunlin and Snipe.

With the rain stopping and the sky brightening to the west, we hurried on to the seawall. No sooner had we got there than the Short-eared Owls were up. Out across the grazing marshes, first two birds circled up into the sky, chasing each other round and round. Then a third bird appeared below them – it seemed to be swooping down repeatedly and a closer look revealed it was actually mobbing a Common Buzzard sat on a gate. The first two Short-eared Owls circled up ever higher, until one eventually peeled off and  flew over the seawall ahead of us and out onto the saltmarsh. It turned and flew back towards us and landed in the grass giving us stunning views in the scope, even of its striking yellow eyes (irides!). It sat for some time, preening, looking round, flying a short distance before landing back again. 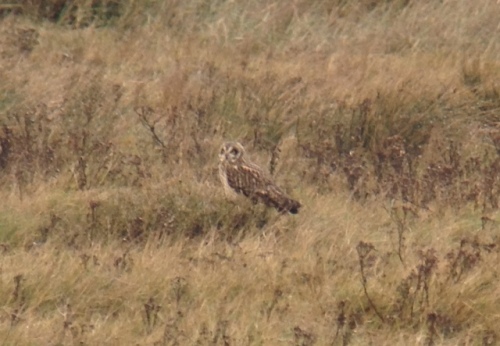 We also stopped to look at the Rough-legged Buzzard, sat on one of its usual posts, and a very pale Common Buzzard which does a good impression of a Rough-legged for the unwary. However, they were slightly overshadowed by the performance from the owls.

Next it was time for the Barn Owls to start appearing. First a glimpse of one in the distance by the pines, then a second way off over the marshes, until finally one appeared closer to us. We watched it for some time, hunting over the grass and perched up on a post. With the afternoon getting on and the light starting to go we walked back towards the car. The Barn Owl was still hunting over one of its favoured fields and we stopped to watch it flying back and forth and pausing to hover, much closer now. It eventually flew off over the hedge at the back just as yet another Barn Owl appeared over the track right in front of us, almost overhead, and headed out around the field which the other bird had only just vacated, flying along the field margin close to where we were standing. Such amazing birds. We thought that was probably the best of it – four Barn Owls at Burnham Overy alone!

As we walked back to the car,we could hear them first, yelping and cackling, before the skeins of Pinkfeet started to appear from the west. Several thousand came in overhead, circling down to land on the grazing marshes or flying on further to Holkham. This is truly one of the great sights of an evening on the marshes and of a winter’s day in Norfolk.

However, the day was still not done and we drove on round to Holkham to have a last look over the marshes there. A short walk down the track and yet another Barn Owl appeared, quartering the field in front of us. It flew round and round before turning and heading straight towards us, landing on a post just into the edge of the field. It sat there for several minutes with the moon up in the sky behind it, as if it was showing off just for us. Wow!

Barn Owl – this one gave us stunning views at dusk

We walked round to Salts Hole, with the sound of the Pinkfeet out on the grazing marshes, and watched the last of the sunset to end the day. Despite the rain and cold – what a great first Owl Tour of the season.