Day 2 of this year’s tour run in conjunction with the Titchwell Manor boutique hotel, we spent the morning exploring the RSPB reserve at Titchwell. However, before we even set off we stopped to admire the large flock of Brent Geese feeding on the winter wheat field in front of the hotel. Several groups of Pink-footed Geese flew overhead and inland to feed on the discarded sugar beet tops, but five had settled with the Brents, giving us a good chance to compare them side-by-side, before the Pinkfeet flew off to join their peers.

On to the reserve, and we started with a quick look around the bramble bushes and apple trees in the car park. We spent a short time watching a mixed flock of tits working its way round the hedges, a Great Spotted Woodpecker flew over, several smart male Chaffinches were feeding on the ground and a Redpoll came overhead calling. One of the extremely confiding resident Robins came to investigate – unfortunately, we had not brought it any breakfast! 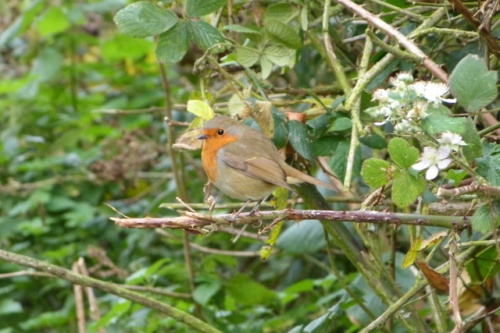 Robin – the birds in the car park are always very confiding

At the visitor centre, several tits and finches were coming in to the feeders. However, one of the Moorhens seemed to be monopolising the fat balls, perched rather precariously on a feed tray half way up the feeder stand! The flocks of finches along the main path held a single Siskin amongst the Goldfinches and Chaffinches. A single Chiffchaff swept through amongst the Long-tailed Tits.

The grazing marsh pool held a selection of duck, including several Tufted Duck and Little Grebes. But at the back of the reedbed pool we picked up a small party of Red-crested Pochard – a single drake with his bright orange head with three duller females. Lurking on the edge of the reeds , they eventually came out and allowed us to get a good look at them. A couple of Marsh Harriers were quartering over Thornham Marsh, a Cetti’s Warbler sang from the bushes in the reedbed and a Reed Bunting perched up by the entrance to Island Hide. 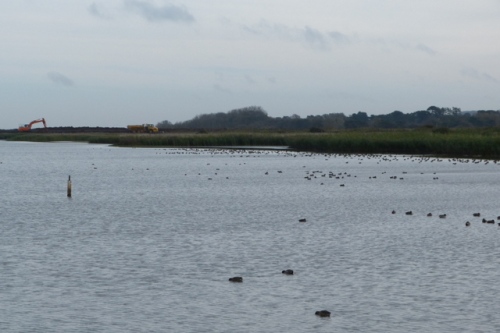 The freshmarsh held a good selection of waders and wildfowl. Among the former, a couple of Spotted Redshank were trying to hide on the edge of the large flock of Black-tailed Godwit – they woke up long enough for us to get a good look at their long needle-fine bill, with a distinctive small drooping tip. We also saw Avocets, Lapwings with a single Ruff, Dunlin and an enormous flock of Golden Plover in the distance, up on the fields behind the reserve. A Common Snipe on the edge of the reeds in front of the hide also drew some admiring looks. Lots of Teal were gathered in front of the hide, allowing us to look closely at the intricate detail of their plumage, with Shelduck, Wigeon and Shoveler also out on the water. However, the highlight was a Water Rail which appeared on the edge of the reeds. Initially coming out too briefly for everyone to get onto it, it then came out for a second look and proceeded to bathe and preen for several minutes before running along the edge of the reedbed. 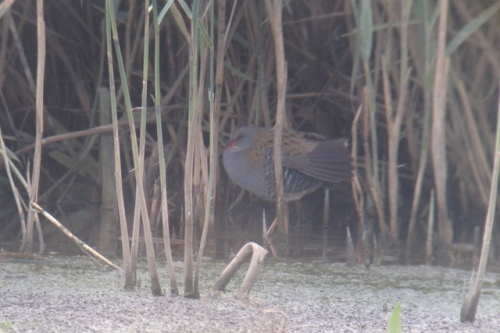 From the Parrinder Hide, we added Common Redshank to the day’s list and got a good look at a couple of Curlew out on the Volunteer Marsh. A single Knot eventually came much closer and allowed us to get a good look at it. A small group of Linnets fed out amongst the vegetation. On the saltwater pools, we got a chance to compare Black-tailed and Bar-tailed Godwits. 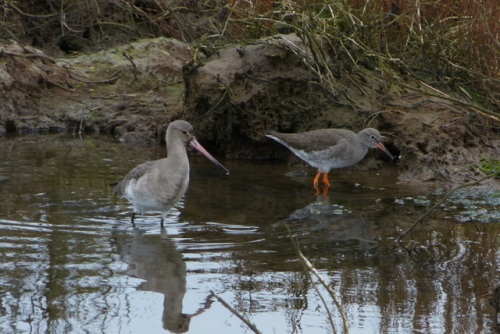 Out on the beach, lots of Oystercatchers were gathered along the tideline, small groups of Turnstone flew past and several Sanderling were running in front of the waves. The big surprise was three Sandwich Terns out on the beach – these birds should probably be on their way to Africa but have been lingering here, possibly in response to the unseasonably mild weather conditions.

Looking out to sea, the highlight was two male Long-tailed Ducks, though it was a struggle to get everyone in the group onto them. We also saw several Common Scoter, Eider, Great Crested Grebes, Red-throated Divers, Guillemot and Razorbill. By now, the wind was starting to take its toll, so we beat a hasty retreat. We stopped just long enough to admire a large flock of Brent Geese which circled in noisily and landed on the freshmarsh – these were the birds we had been watching first thing this morning in front of the hotel, either spooked from the field, or just come in to bathe. Then it was back to the hotel for a warming bowl of soup and some sandwiches to wrap up a very successful couple of days.