A very relaxed day birding in North Norfolk. The last few days have been rather quiet bird-wise here, but today was much better – we had a good day out and managed to see an excellent selection of residents and migrant waders. We started at Stiffkey Fen. The set aside field next to the road when we got out of the car was alive with colour – covered in poppies. A small group of Curlew was feeding out amongst them, and made quite a picture.

Curlew in a field of poppies

One of the first birds we saw when we got out to the Fen was a Kingfisher, which landed briefly by the sluice before flashing away across the muddy creek on the seaward side. This has been a favoured site recently for one of the post-breeding flocks of Spoonbills, and we were not to be disappointed. When we arrived, 13 birds were sleeping on one of the islands, but woke up for a while when a Sparrowhawk shot overhead and flushed all the waders. Later, a 14th bird flew in to join them. 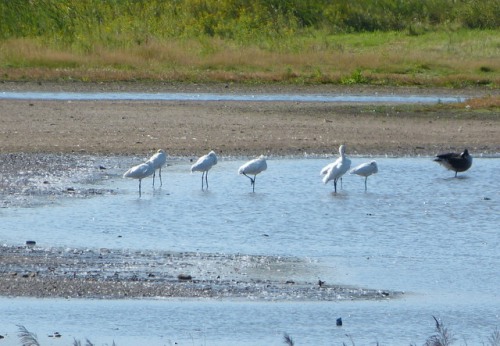 Spoonbills – 7 of the 14 present today

There was also an excellent selection of waders present. The highlight was a couple of juvenile Curlew Sandpipers feeding amongst the legs of the sleeping Black-tailed Godwits, but we also saw several Avocet, Dunlin, Ruff, Snipe, Common & Green Sandpiper, Redshank & Greenshank, with lots of Oystercatcher out on the saltmarsh. In the bushes on the way back, we stopped to admire a large group of Long-tailed Tits, several of which had stopped to preen in the sun. They formed part of a much large mixed flock, which included a variety of tits, as well as Lesser & Common Whitethroat, Blackcap and Chiffchaff.

Long-tailed Tit – preening in the sunshine

A quick visit to the Heath was mostly quiet – always difficult in the middle of the day on a sunny Bank Holiday with lots of disturbance! However, the Heath itself was looking beautiful, with the heather in bloom, and despite the issues we managed to locate the target bird with a minimum of fuss. A churring from the low heather close to the path revealed the location of a Dartford Warbler. Standing quietly for a few minutes, we were eventually rewarded with views of the bird itself as it fed furtively through the gorse and perched up briefly for us to get a better view.

The Heath in full bloom

We returned to Cley for lunch, before heading out onto the reserve. A nice Little Egret was feeding on the grazing marsh by the path. A Cetti’s Warbler was hopping around in one of the bushes in the reedbed, calling. From the hides, we watched Avocets feeding, sweeping their bills side to side in the shallows, and Black-tailed Godwits probing deeply into the mud, heads underwater. Amongst all the other waders, a single Ringed Plover was new for the day, and a Whimbrel flew over calling. A Marsh Harrier quartered the reedbed.

Little Egret on the grazing marsh

We walked out along the East Bank to Arnold’s Marsh. Lots of Sandwich Terns were still gathered out on the sandbanks – plenty of juveniles, with adult birds still returning with fish for their young – and a few Common Terns were amongst them. In the reedbed, several Reed and Sedge Warblers were zooming around, perching up just long enough for us to get a look at them. But the best performance came from the Bearded Tits – their calls gave away their presence initially, then as we watched, first 4 birds crept up the reeds, before being joined by more. Mostly juveniles, they were flying round between the patches of taller reeds, calling. As they gathered together, at one point we had a grand total of 14 together perched up in the reeds!

As we walked back at the end of the day, a shower skimmed past to the south of us, clipping us for a few seconds and just enough to form a dramatic double rainbow. A lovely backdrop to finish. 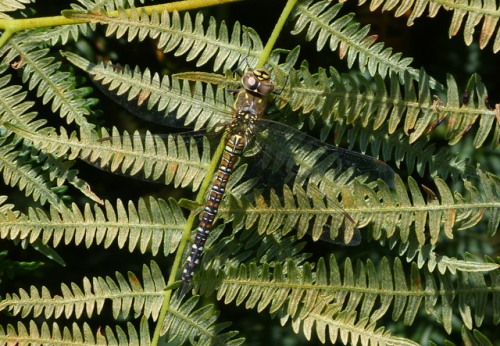