A private tour today, an 80th birthday present for one of the participants, so a relaxed day in North Norfolk was in order.

We spent the morning at Holkham. Walking west in the lea of the pines, we spent some time watching the summer warblers and a couple of mixed tit flocks which had already started to gather. A very obliging Little Egret sat preening in its usual tree, several Marsh Harriers were quartering the grazing marshes and a male was displaying over the reedbed – a fine sight. There was a good variety of butterflies to be seen as well, including White Admiral, Ringlet and Large Skipper.

A little group of Spoonbills was around the ‘nursery’ pool. We counted at least 10, including lots of pearly-white small-billed juveniles, and several adults, dirtier in colour with shaggy crest and yellow-tipped bills. It was hard to tell exactly how many there were, as birds were constantly ferrying back and forth between the pool and the trees. While we were watching them, all the wildfowl and waders suddenly took to the air – a quick scan revealed a young Peregrine (raised last year) racing across the marsh. It wheeled round and landed in the trees in front of us, allowing us great scope views. Amongst the Greylags and Egyptian Geese, a couple of Pink-footed Geese were lingering out on the marsh, having failed to head back to Iceland for the summer.

After lunch, we headed up to the heath. Lots more Silver-studded Blues are on the wing now, and we also saw Common Blue and Meadow Brown. Yellowhammers and Linnets were singing amongst the gorse. A Woodlark was singing overhead, before dropping into the thick grass out of sight. The highlight was a couple of Dartford Warblers which we followed feeding through the heather for a while, at times coming very close to the path. A lovely way to end the day. 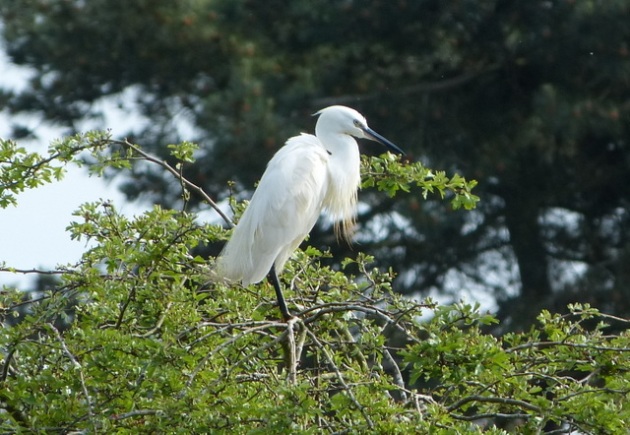